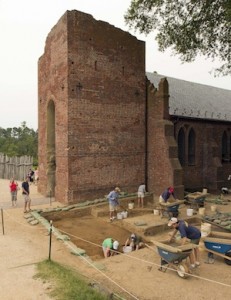 We’re pleased to report that Historic Jamestown announced that the Jamestowne Society and several companies (including First California) have collectively made the first major contribution to help stabilize and preserve the “iconic” 17th century church bell tower. As our Governor Ginny Gotlieb has suggested in our posts of July 30 and November 2, we gave the Society $500 for this project fund, and other companies and members brought it to $10,000.

Andrew A. Zellers-Frederick, Director of the Historic Jamestowne Fund of Colonial Williamsburg Foundation gratefully acknowledged this in the current number of the Jamestown Rediscovery Newsletter. He especially noted the efforts of our new Society Governor, Dr. Michael Frost and Historian Carolyn Farmer.

He went on to tell us, “These funds will be used to seek matching grants and promote other donations towards the $150K goal from foundations, corporations and individuals. 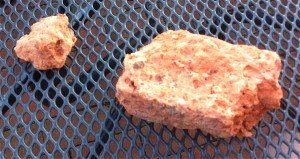 “Colonial Williamsburg’s Director of Historic Architectural Resources, Matthew Webster, has been examining the Church Tower (a great example of the cooperation because of the collaboration between CW and Preservation Virginia) and provided this latest update.  All facades of the Church Tower, interior and exterior, require urgent repointing.  The south wall is the worst, requiring stabilization of loose brick (we continue to get pieces falling to the ground) in the upper portion of the wall with again significant repointing needed for both the interior and exterior. 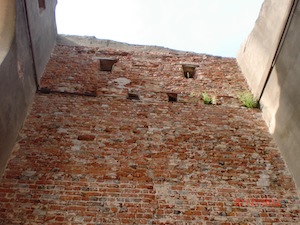 “Various invasive plants, growing out of the walls, need to be removed as soon as possible (many are on the east wall).  A crack in the west wall above the arched opening should be stabilized.  Matt does not recommend removing the parging from the east interior wall until the stability of the arches is confirmed.    Matt also feels the work on the south wall is definitely the most urgent and should be addressed as soon as the weather permits in 2013.  As we first planned, this project will be done in phases with the south wall being the first.  Matt estimates a cost for this early 2013 work at about $25-30K, but provides the caveat that we will not know some items until the work commences and is fully underway.

“Matt also examined the Memorial Church, the Cemetery Wall and the Cemetery.  Of the three, it seems that the cemetery wall is the worst and urgent stabilization is needed.  However, with this being said, these items are not in the Church Tower Project.”

If you want to complement these contributions, please send your donations to the First California Company (Harry Holgate, Treasurer, 115 West 4th Street, #208, Long Beach, CA 90802-2312) or directly to the Society at Post Office Box 6845, Richmond, VA 23230.  Indicate that you are affiliated with the First California Company and that the donation is for the Jamestown Church Tower Restoration Project, the Society’s dedicated capital fund account for this purpose.