Geniality and welcoming are the hallmarks of the several meetings we hold throughout the year, including an Annual Meeting in the spring. 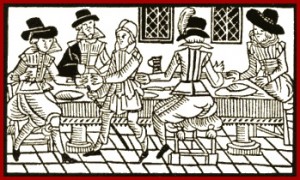 We rotate them among various locations in Southern California.  They are generally luncheon meetings held on Saturdays that feature either an eminent authority or one of our members as a speaker on Jamestown, an aspect of early American colonial history, genealogy, our ancestors and their descendants and other relevant topics or events. Our objective is to inform and educate in an engaging way. 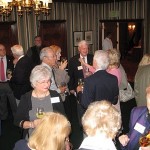 Our meetings offer opportunities to meet other Jamestowne Society members and guests who have links to our Jamestowne heritage and can share stories about their ancestors and their times. We especially welcome members of other companies, prospective applicants, and others wishing to learn more about Jamestown and our Society.

Our company’s 2020 Fall Meeting will be held by Zoom on Saturday, October 24, at 11:00 AM. For details and more information, please contact our Governor (see below) and watch our News Page.

Also, please watch for the dates and details about our future meetings on our News page.

Our Company’s Governor can assist you with more information

We post information about forthcoming meetings on our News tab; we also send announcements directly to our membership and others.

To suggest topics or speakers for future programs, please contact our Lieutenant Governor.

(Note: Below are links to some of our recent programs; you can find more details about them among the posts on our News tab):