Posted on April 19, 2011 by The Editor
Barbara Barbarics presented a talk titled “Elizabethan Clothing as a Clue to Class, Commerce, Christianity, and Competition” to the First California Company’s February 2011 meeting in Claremont.  She brought examples of the elaborate clothing worn by “the better sort” and showed the effort it took to dress properly.
Men and women were equally vain and elaborately dressed.  Of particular importance to men was a well-turned leg.  Shakespeare has Juliet’s nurse commend Romeo by noting, “Though his face be better than any man’s, yet his leg excels all men’s”. Ms. Barbarics showed various examples of ruffs, the stiff, pleated detached collars worn by men and women.  It was a vehicle for conspicuous consumption when made exceptionally large and decorated with fine lace, jewels and embroidery.  The ruff was heavily starched – and often rather dirty because maintenance was difficult.  The natural ivory tone was often died a soft pastel until Queen Elizabeth I ruled that blue ruffs would no longer be tolerated.  A wire covered in silk was pinned to a man’s doublet or a woman’s dress and the ruff pinned to it.  In fact, the entire wardrobe consisted of components pinned together with straight pins.  The safety pin had not yet been invented.  Over their shirt men wore a doublet long enough to cover small holes on the inner side to which their britches were laced. Britches’ length varied from the very top of the thigh to the knee, depending on style and the shape of the wearer’s leg. For the wealthy, britches would be made of multiple layers of fine fabric with the outer most layer in panes or strips through which fancy inner fabric could be  pulled in a puff. For poorer men, a high-collared doublet would allow the undershirt to overflow in a softly gathered collar without a separate ruff and britches would be of a simple, sturdy fabric.  Over the doublet at the waist was a leather girdle that allowed men to tie on a purse and perhaps a pen case and ink horn. Over all this might be a jerkin, a sleeveless tunic often made of leather for working men.  A man’s final covering might be a cloak or a long sleeved gown (think of a judge’s robe), perhaps trimmed in mink.  Stockings were of wool or silk and gartered, another site for decoration. 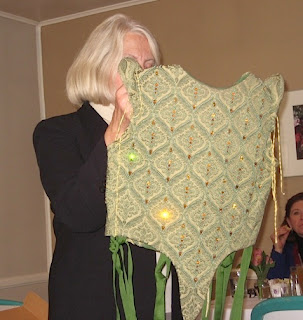 The many components of a wealthy woman’s attire required staff to assist her in dressing.  An under dress, bodice, separate skirt and sleeves were the basics.  A poor woman would have little else.  Most women could have multiple outfits by varying the combination of components. Elaborate, even bejeweled, hugely engorged sleeves were a favorite gift to the Queen.  The rigid bodice was designed to give a long, pointed V shape and could be cut quite low, a look even the Queen favored at times.  The wealthy might have an overskirt of elaborate material split in the front to show an underskirt, also of expensive material.  The shape of the skirt was defined by a farthingale, a structure made of whalebone or rope or twigs, worn under the skirt.  A stylish look was a flat front with wide extensions to the sides and back.  A simpler woman could tie a bum roll around her waist to lift the edge of her skirt at the back and sides.  She often wore an apron over the basic skirt.
Ms. Barbarics explained how detailed “Sumptuary Laws” regulated what could be worn by those of each class.  For example, no one could wear silk in hose, hats, nightcaps, girdles or scabbards except a Knight’s son and heir, his son’s wife or his daughter and any man worth 200 pounds in goods.  Servants, shepherds, common laborers, and farmers worth less than 10 pounds a year could not wear fur of any sort.  This illuminated how the rigid class structure was manifest and enforced and thus played such a big part in the early years in Jamestown.
Reference was made to the wreck of the Sea Venture, Stephen Hopkins’ challenge to authority in Bermuda, Shakespeare’s “The Tempest”, and the cultural life of London.  There was a lively discussion after the presentation.
This entry was posted in News. Bookmark the permalink.