A Visit to Pocahontas 400; An English Commemoration of Her Death and Interment

As Pocahontas was my tenth great grandmother, I was invited by Reverend Canon Chris Stone of St Georges Church in Gravesend, England to attend the March 21, 2017 commemoration of her death and interment in the church, 400 years from the date of her burial. I also attended as Governor of First California Company of the Jamestowne Society, as well as on behalf of the National Society of Colonial Dames of the XVII Century, as its California State Chair of Pocahontas Gardens, Projects and Scholarships. I believe that I was only Pocahontas descendant in attendance.

The commemoration was the highlight of the community’s two-year Pocahontas 400 Life Celebration.

Gravesend is an ancient town on the Thames with over a thousand years of English history. It was the port of departure for ships sailing to the New World and where Pocahontas died and is buried. She was better known to her tribe as Matoaka, daughter of Powhatan. She was called by her Christian name Rebecca in England, where, in 1616, the Virginia Company sponsored her tour and appearances to help promote Jamestown and its nascent tobacco industry.

The following is from the church service program: 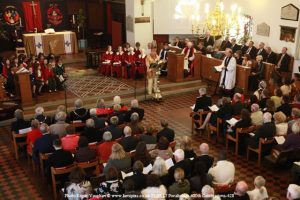 A view of the service at St. George’s;  I am in the left fifth row, aisle. Chief Adams of the Mattaponi Tribe is at the lectern.

“…Pocahontas, in her 22nd year, was due to return to Virginia with her husband and son in March 1616 [1617], sailing on the George, which was under the command of Captain Samuel Argall. Either ashore or onboard, Pocahontas succumbed to the illness she had endured and breathed her last. It’s said that her last words were, ‘all must die. ‘Tis enough that the child liveth’. The Reverend Nicholas Frankwell MA [Cantab], then rector of Gravesend, may well have conducted the burial service, laying Pocahontas to rest.

“Among the mourners would have been not only her husband, John [Rolfe], but also Captain Argall and Ralph Hamor, one of the original 1607 settlers, now also returning to Virginia. St. George’s at the time is said to have been damp and dark. The entry in the parish register reads, ‘1616 [1617] March 21, Rebecca Wolfe, Wyffe of Thomas [John) Wolfe Gent. A Virginia Borne, was buried in ye Chancell.’

“The church building in which, most agree, Pocahontas was buried, burned down in 1727, along with much of Gravesend. In due course, thanks in part to monies granted by the Gravesend Churches Act 1730, a new church was built and opened in 1733. Ever since then, the whereabouts of Pocahontas’ remains have been a matter of conjecture.

“Today’s service commemorates the occasion of Pocahontas’ burial 400 years ago and acknowledges the contribution of her example to peace and reconciliation both during her life and down through the centuries.” 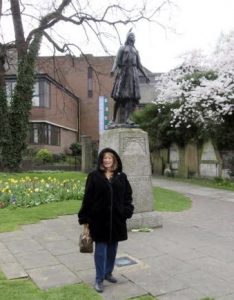 At the Pocahontas Statue

A statue in the gardens of the rebuilt church was erected in 1958 and is a copy of the one in Historic Jamestown. This memorial to Pocahontas, who lost her original name and religion, and in 1616 [1617] her life, has been relisted by Historic England to mark this 400th anniversary. The life-size bronze of Pocahontas has had its heritage list entry updated to include a full description of her life and role in English and American history. I saw school children placing flowers at the statue of Pocahontas the day before the service.

Pocahontas 400 led up to the anniversary day of her burial. I arrived on Sunday, March 19, and, at the church crowded with guests, heard David Givens of Jamestowne Rediscovery give two interesting talks, a slide show on Pocahontas and the archeological excavations at Historic Jamestown, After David’s first talk, he gave Reverend Stone one of the books he had written. 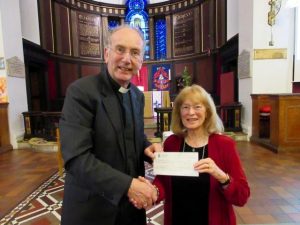 After his second talk, I gave Reverend Stone a $200 check from our First California Company and its members for the maintenance of the church’s Pocahontas Gardens. Hearing my own short speech, David Givens added that he was very grateful to the Jamestowne Society for giving him a grant for his Master’s Degree at the University of Leicester in England.

Tuesday, March 21 was an exceptionally sunny and beautiful day, where several hundred invited participants gathered for a parade in nearby St. Andrews Park, with costumed musicians playing for the crowd. As the crowd was gathering, there was a ceremony aboard a small red ship on the Thames where water from the James River was poured into the Thames to join the two rivers and two nations. 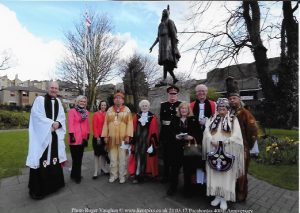 I then participated in the early afternoon parade through the village with a stop at The Market Place to see a sculptural Peace Tree and a display of colorful feathers by Kent-based Animate Arts, created to commemorate Pocahontas. Legend has it that Pocahontas planted a mulberry tree at a manor house in Heacham, Norfolk, where Rolfe was from.

Upon arrival at St. George’s Church, Bishop Longstaff presided over a special service, during which Reverend Stone thanked the Jamestowne Society, Colonial Dames of the XVII Century and me for our support of his church. The Church was packed to capacity with invited guests, while an overflow crowd was able to view the services on television in another building. Afterwards, we went to the Old Town Hall for refreshments with the Mayor, which was accompanied by the costumed musicians.

I am grateful to Reverend Stone for inviting me to attend as it was very moving. 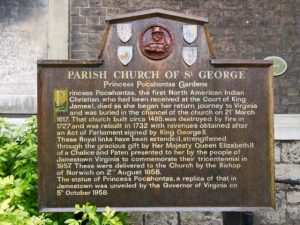 The Pocahontas plaque at the church 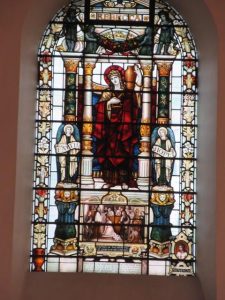 The Pocahontas window in St. George’s 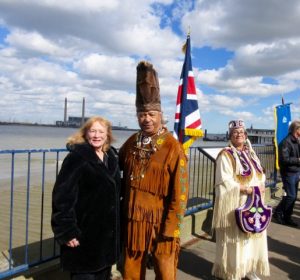 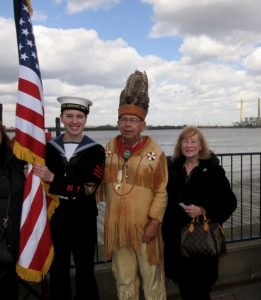 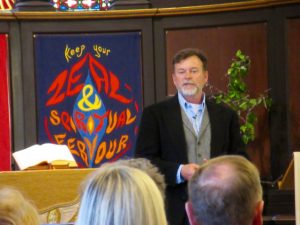 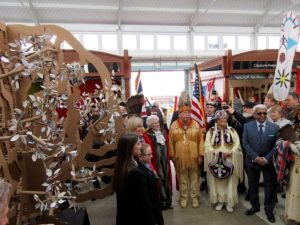 A pause in the parade 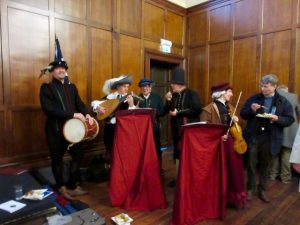 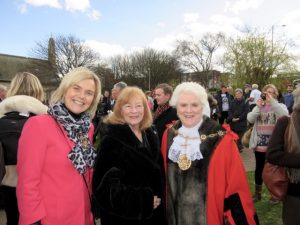 With the Mayor of Gravesham Greta Goatley (right) and the Mayor’s daughter, Victoria Bonce (left)

With permission, two photos were shown from Kentpix.