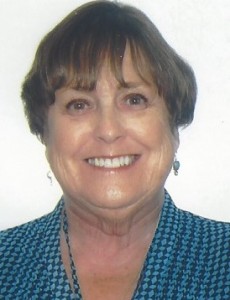 Martha “Marty” Cleveland Sommercamp, a long-time Friend of First California Company, recently was enrolled as both a member of the Society and our Company. Her ancestor is Reverend Robert Braswell.

She submitted this profile for us:

I grew up in a military family. My father was an officer in the U.S. Navy and a big history buff. He read mostly non-fiction history books about wars and every book on the Civil War. I am sure he was an expert, as he seemed to know a lot about each place we visited. Because of his interest, every time we moved, which was frequently, he would take us to battlefields or places of historical interest along the way. I had been to almost every famous battlefield in the USA by the time I was 10. He would tell us that the Cleveland family had fought in Colonial Wars, the French and Indian Wars, the Revolutionary War, the War of 1812, the Civil War, World War I, World War II, and the Korean War. He also told us that supposedly the Clevelands had been original Jamestown settlers. Best of all, the original Cleveland brothers were the illegitimate sons of Oliver Cromwell and Lady Elizabeth Cleveland. They were sent here because they would have no future in England.

Later, when my dad retired from the USN, we started working on genealogy together before the Internet. It sparked my interest, so I have spent the last ten years working to establish my genealogy.

After I joined the DAR, I started the process of finding the Cleveland who landed in Jamestown. Unfortunately, family lore was not exactly correct, as the Clevelands were not listed as qualifying ancestors. No early records exist for them, although they were nearby in Orange County.   I wasn’t too worried, as I had the Graves line in the family tree. Alas, my Graves’ line was closed to new members. For five years, I have tried various family lines without success…. always a missing piece of information.

A little over a year ago, I contacted the Jamestowne Society to find a genealogist to help me in my search. I worked with someone who actually lives in the area where my ancestors had a plantation. For over 15 months, she tried various lines in my family. Finally, last June she was able to establish a qualifying ancestor for me to use in the application process.

Reverend Robert Braswell was an Oxford-trained Anglican clergyman. He was born in Middlesex, England, before October 1611. He was living on the Isle of Wight on the Pagan River in 1652. He was elected to serve as a Burgess, but he was declared ineligible, as he was the rector of Isle of Wight Lower Parish and the leader of St. Luke’s Church. He married Faith Braswell in England, and then married Rebecca Izard. He died on May 1, 1668. I descend through his son, Richard. No one in our family had ever mentioned the Braswell name as ancestors!

I am so pleased to finally be a member of the Jamestowne Society. Thanks to Joanne Murphy for inviting me to join and to both Donna Derrick and Julie Plemmons, who both helped me so much. Donna started me on this journey during a visit to her home several years ago. I went in her office and saw the evidence of all the organizations she belongs to in frames on the wall. I started asking her how you qualify for all the various groups. As Donna gave me an overview, I kept saying I thought I could join this group or another. I am now a member of a dozen societies. (DAR, USD1812, Colonial Dames, Daughters of American Founders and Patriots, Daughters of American Colonists, Daughters of Colonial Wars, Daughters of Indian Wars, Southern Dames, Colonial Clergy, United Daughters of the Confederacy, and Dames of the Court of Honor) Julie has been such a great resource; I could not have done this without her. And best of all, I gained new friends from the process.

I have lived in Solana Beach for over 30 years. We moved here when my husband retired from the USAF. I am a graduate of San Diego State University and have a Masters Degree from the University of Southern California. I worked for many years in the public sector as an employee benefits specialist. I am the mother of two sons. John Owen is a FBI agent in Sacramento, and James is a firefighter in El Dorado Hills. I have 4 grandchildren, who will be eligible to join the Jamestowne Society as 14th generation descendents of a Jamestowne ancestor.