How the Jamestown Colony led to the sailing of the Mayflower

I admit that, despite many clues, until recently I never thought much about what role Europeans played in New England before the Pilgrims arrived on the Mayflower in 1620.  All I knew was that their native friend, Squanto, greeted them in English, having been kidnapped and carried off to Europe years earlier. Tragically, when he returned, everyone in his village had died of a European disease.  Where his village once stood was now the site of the colony of Plymouth Plantation.  We also know that our ancestors agreed to the Mayflower Compact, signed in 1620 off Cape Cod, because they somehow missed arriving in “Northern Virginia,” which was the area of their land patent.

So, when did Europeans first reach New England?  Where did the name “New England” come from?  How about “Cape Cod?”  How about “Plymouth?”  And was there competition?

The answers to these questions actually lie in Jamestown, the first English language colony to survive, founded in 1607.

The key founder of Jamestown was an Englishman called Captain Bartholomew Gosnold, born in 1571.  He pursued a seafaring life.  Before Jamestown, in 1602 he explored colonialization in “northern Virginia” in what is now New England. In doing so, he named the peninsula he reached, Cape Cod because … well, there was a lot of cod.  He named an island there for his dead daughter, Martha’s Vineyard. On another island off the cape, now called Cuttyhunk Island, he and his people built a fort, but after a month they abandoned it. 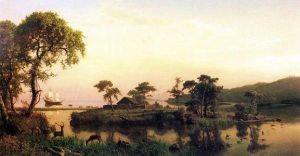 In Dec 1606, Gosnold managed to pull together enough backing via the London Company, which he helped found, for another try and this time set out for what would become the Jamestown Colony. He died there in August 1607.  In 2003, what is probably his long-forgotten grave in Jamestown was discovered by archeologists.

There was another try at establishing a colony in Maine, the “Popham colony” in 1607, at the same time as Jamestown. This effort was sponsored by the rival Plymouth Company, organized by John Popham and Ferdinando Gorges, and led by John’s nephew, George Popham.  Both John and George Popham died the first winter and the colony was abandoned within the year.

In 1609, Captain John Smith, who had been the president of Jamestown’s governing council, left for England after injuries and in disgrace.  But, in 1614 he again set sail for the New World, with two ships, this time to explore Maine and Massachusetts.

During his expedition, some of his company took native people as captives including Squanto. (It is uncertain as to whether this was the second time Squanto was taken captive.  He may originally have been taken captive in 1605 by an agent of Ferdinando Gorges.) 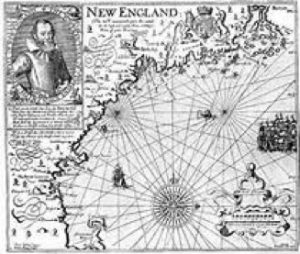 This map, New England Observed, 1616 is provided courtesy of the
Osher Map Collection at the University of Southern Maine and is part
of John Smith’s Description of New England

In 1616 in England, Smith published a book called A Description of New England. It is believed that this was the first time the name of New England was used for the area.

Smith created the map shown here and gave place names to various locations along the coast of Massachusetts including New Plimouth near Cape Cod.

It is unclear where the diseases that decimated the native people came from, but we know that in the years after Smith’s visit and before the Pilgrims arrived, a number of fishermen, French as well as English, frequented New England’s waters.  Cod was a very valuable commodity.

The religious separatists in Leiden, the Netherlands, who became known as the Pilgrims, must have poured over that book.  It was they who chartered two ships, including the Mayflower, for their voyage to the New World.

In 1619 in London, the Leiden separatists entered into a deal for a land patent with the London Company in the jurisdiction of the London Company, i.e., no further north than New York, as well as ships with the same company. When the Pilgrims started negotiations, they were soundly cheated by their original investors.  To satisfy new backers, a consortium of London financiers known as the Merchant Adventurers, they had to include “Strangers” among the passengers.  Many of the passengers on the Mayflower were not separatists but instead Strangers.

By accident or design, the Mayflower’s arrival on Cape Cod was considerably outside the jurisdiction of the London Company.  The following year in 1621 the Pilgrims obtained a new patent from the newly reorganized Plymouth Council for New England.

One of the Strangers was Stephen Hopkins, who came on the Mayflower with his second wife, some of his children, and two servants.  Stephen was unique in that he was the only passenger who had ever been to the New World before. In 1609 he had come on the “third supply”, then spent 9 months on Bermuda after a shipwreck, before the castaways built two smaller ships to get to Jamestown.   He then spent several years in Jamestown. A letter regarding “Eliezer Hopkins” arrived in Jamestown in 1614, probably bringing the news his first wife had died, and so he returned to England, Thus, he is a qualifying ancestor for both the Jamestowne Society and the Mayflower Society.

And not to forget the Canadian connection: The English were not the only Europeans interested in the area.  The French made several attempts to colonize in New England, mostly minor settlements for fishing and hunting as well.   Their first real North American colony was established in 1604 at St. Croix, an island at the extreme northern edge of what is now Maine.

St. Croix failed due to disease and in 1605 the founders moved what remained of it to what became Port Royal Habitation in modern Nova Scotia. A second French attempt in New England was a Jesuit mission called Saint Sauveur founded in 1613, also in northern Maine.  Two months later forces launched out of Jamestown wiped out both Saint Sauveur and Port Royal in 1613. Thus, Jamestown made New England safe for English Protestants.  And so, in 1620 English Protestants, i.e., the Pilgrims, started the successful colonization of New England.

Erica Hahn is a member of the California Mayflower Society and the Jamestowne Society.