Each year, the Council encourages the Governor to participate in the Society’s spring Governors’ Forum and other meetings held annually in Williamsburg. Following is my report on my participation May 18-20, 2017. 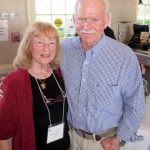 On May 18, the Society leadership hosted a reception for company governors and their guests. We travelled by motor coach from the Williamsburg Lodge, where the main events were held, to Jamestowne Island. We were met there by a reenactor portraying Governor Yeardley, who led the group to the Dale House Cafe. We gathered for wine and cheese and met Dr. Bill Kelso, Jamestown Rediscovery’s Head Archaeologist, where I purchased an autographed copy of his most recent book, Jamestown The Truth Revealed.

We also met Dr. James Horn, President of the Jamestowne Rediscovery Foundation and David Givens, our 2014 Alice Massey Nesbitt Fellowship winner and Senior Archaeologist at Jamestown Rediscovery. I had previously met Mr. Givens in March at St. George’s Church in Gravesend, England for the Pocahontas Life and Death 400th Anniversary Celebration, where he spoke about Pocahontas and the archeological work at Jamestown. We received an informative update on the dig progress before we returned to the Lodge. 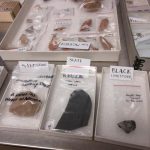 We then boarded buses to Jamestowne Island for a tour of the dig site, Archaearium and private vault. I especially enjoyed the vault as I had never been there before. Over two million artifacts – lost, broken, or discarded by the early colonists – are housed in its state-of-the-art collection room. They are cataloged and analyzed with representative objects on display that show interactions with the Virginia Indians.

One of our speakers and tour guides was Governor Yeardley’s 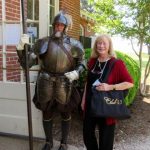 reenactor from the night before and who now portrayed Capt. Edward Brewster. The very knowledgeable Jamestown Rediscovery staff also served as tour guides.

We had box lunches at the Dale House Cafe. It was a long but interesting day but unfortunately it was unseasonably warm for Virginia in May. Many of the others met for the Governors’ Dinner at Christiana Campbell’s Tavern, which is said to have been a favorite of George Washington’s. As I had the pleasure of dining there the year before, I chose instead to make it an early night in order to recover from the heat of the day.

The Society Council’s most informative meeting was held the following day, May 20, in the Williamsburg Lodge.  Among items discussed were new insignia items, such as a new duffel bag and new style signet rings. The Council also conferred an Honorary Society membership on Dr. Bill Kelso. Governor Zillion also mentioned and reiterated the Society’s opposition to Dominion Energy’s proposal to build transmission towers across the James river. The Council also approved a sash for former Governors. 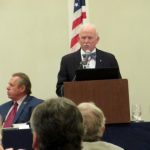 The Membership Luncheon followed and was preceded by a bagpiper in Scottish regalia. Governor Jerry Zillion recognized the veterans who were in attendance and presented a new company charter to the Bay of Naples (Florida) Company. He then surprised Dr. William Kelso with the announcement that he had been named an honorary member of the Society. Dr. Kelso was accompanied by his wife and was the guest speaker. He reviewed the current explorations of the sites of early churches within the confines of the 1907 Memorial church. After the luncheon, he made himself available to sign his new book.

It should be noted that in March I had invited Mr. Givens to speak at a First California Company event and stay at our San Diego home. I reminded him of my offer at the wine and cheese event and he indicated that he might be amenable. I also took the opportunity of inviting Dr. Kelso and his wife to stay with us and give a talk at our luncheon and sell his book. 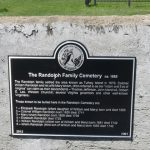 Lastly, in addition to all that I learned about Jamestown and Jamestown Society, there is the history in that area to be remembered, as well as the friendships that are made to entice you. The best way to travel between the Richmond Airport and Williamsburg is by a rental car. Instead of the Interstate, I chose to take historic Route 5, so I could stop at my William Randolph family gravesite at Turkey Island Farm to place flowers on their 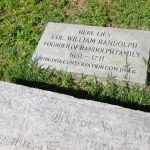 graves. I have been told that it is the oldest family gravesite in the United States.

I also stopped at Berkeley Plantation, which is known as the 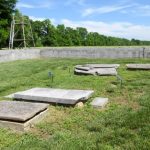 1619 site of the first Thanksgiving (not Plymouth.) There, I needed to pick up some things for our First California Company luncheon this coming November. My ancestor Theodorick Bland is buried next door at Westover, so I also stopped there to place flowers. Shirley Plantation is nearby, where Robert E. Lee’s mother grew up, as well as Sherwood Forrest, the home of President Tyler. So, I combined history remembrances with my conference. 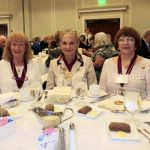 Last, but not least, was the opportunity to renew friendships at the conference, including Jane Cralle Congdon, the Society’s Regional Chairmen Coordinator; Jane (“Xan”) Alexander, the Society’s Webmaster and Western Regional Chairman; Fran Davis, former National President of NS Colonial Dames of the XVII Century; and, former Society Attorney General Susan Godman Rager. I encourage all members to attend our Jamestowne Society meetings and conferences.

(Ed. Note: Please click on the photos to enlarge them.)