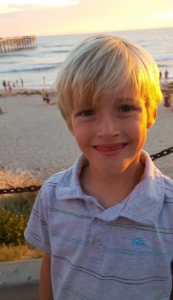 He really is not that new, he has been a member of Jamestowne for about a year, a member of the Company since May of this year; you just have not met him.

He is by far the youngest at age seven and in the second grade.

He is an interesting little character. He has always loved books. When you could sit him on your lap to read to him after you read the page, named everything and try to turn the page he would slap your hand. “I want to study this more and I will turn the page when I am ready.”

When he could sit up by himself, all you had to was dump him on floor with a pile of books and he entertained himself.

His grandmother died when he was 21 months’ old. He would come in and go running to see her. I moved all furniture around so he would not expect her in her chair.  About a month later he looked at me and said, “Nana is up with stars”. I said, “Yes”. He has never mentioned her again.

Then his mother got him a book on Dinosaurs. He learned their names. That was his passion for quite a while and brought the book with him. I can’t tell one from another let alone pronounce their names.

We went through bugs, birds, and I lost track. His father took him up to Temecula to pan for gold. His bucket had two flakes. Now he has his own pan for when they go camping in the mountains. They are always going to the beach and bought him a metal detector for Christmas.

His first find on the beach was a half full pint of whiskey. He was pretty proud of it. His mother, with no sense of humor, poured out the booze and insisted on washing it before it went home. Ladies, if you lost your $10,000.00 engagement ring on the beach, he is still looking

Then King Tut came to town. He got a book on him. Made up his mind he wants to go to Egypt to dig for gold and old bones. For his 6th birthday party, he wanted an ancient Egypt theme. His parents complied; he and his little cousins were wrapped in toilet paper.

He  is also into Legos. The first time I watched him put a box together, I could not figure out what he was doing. The little rascal was reading the directions. Men don’t do that, that is the last resort.

He may sound like a book worm, but he is pretty well balanced. He likes to go for walks and hiking with his parents, plays baseball. Walks the dog.

His life Membership in Jamestowne is  a lifelong gift, which I hope he will always enjoy. 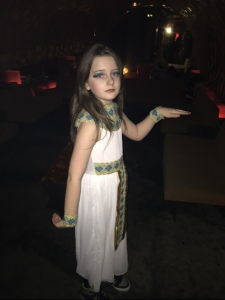 He and this little girl are members of the Huguenot Society of the Colony of Virginia. He was 4 months old and she was about 3 years at the time.

When I showed him this picture, I told him I have partner for you. She speaks French and English and is halfway there. There is nothing wrong with older women.