Our 2020 Winter Meeting Was Held In Pasadena

IMPORTANT NOTE:  The Society has cancelled all May Membership Meeting and events and advises that,  “Your health and safety is our highest priority and we feel this is the responsible action to take at this time.  We will be issuing refunds and email notices to all that had registered.  If you had made lodging accommodations at Kingsmill or another location please cancel them.”  Please contact Society Headquarters at jamestowne.society@verizon.net (phone: 804-353-1226) for more details and watch its website for further information.

We held our 2020 Winter Meeting on February 29 when forty four (including twenty-three members, seven prospective applicants and fourteen guests) gathered on a sunny day at Pasadena’s Brookside Golf and Country Club to share conviviality and fellowship while enjoying Dr. Roy Ritchie’s wisdom and wit. 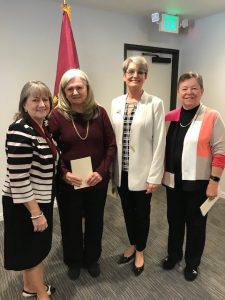 He related the Origins of English Empire: England had no public (royal) funding capacity for New World exploration and colonization, and turned to private investors, who sought repayment and profits. They would seek their returns with trading and by finding precious metals and a passage to Asia.

The new settlers had to deal with the reality of a new frontier. Until the advent of tobacco, Jamestown was not much more than a death trap for the settlers and a money pit for the Virginia Company.  Tobacco changed the future of the infant colony and became their salvation. John Rolfe’s 1614 discovery of the Virginia blend of the native plant with the Caribbean variety became popular and affordable in England. Rolfe’s first shipment of four barrels became an important milestone for the Virginia Company’s entrepreneurs; from it came the plantation system of cultivation and planter class of the James River Valley

Their labor source was to be England’s “surplus” population; bonded servants who would labor for up to seven years in a status close to slavery and who could be bought and sold by the planters who held their contracts.

Another vision came from Sir Edwin Sandys, a prominent parliamentarian and major backer of the Virginia Company, who sought to create a “little England” in Virginia, consisting of farms, villages and towns, all based on the tobacco economy. He urged the settlers to diversify from tobacco to silk, wine, tar, iron, salt and glass. To populate the settlement, in 1619-20 he had the Virginia Company send 3,500 servants and colonists, for a total population of 4,270 in 1620, but only 2,100 were still alive at the 1624 Muster.

At the same, a new legal society was created with the establishment of the General Assembly, a unicameral body that included elected burgesses, mainly representing the big planters; a small group in power that wrote the law. They controlled the increasing labor force of indentured servants needed for their expanding tobacco plantations. They wanted “seasoned” workers, those that survived the summer diseases.

The growing mass market in England drove the need for more labor; one new source of cheap labor arrived in August 1619 aboard the White Lion and Treasurer, private men-at-war that brought the first recorded 20 to 32 enslaved Africans to Virginia. They had been captured from a Portuguese slave ship and traded at landfall Virginia for needed supplies (“victuals”), as reported several months later by John Rolfe. They were placed in servitude as were all other bonded immigrants where they remained as such eight years later, as servitude at the time was de facto slavery.

At the same time in 1620-21, Sandys saw the need to further the settlement’s continuity with the inclusion of women to marry the then-almost exclusively male settlers to help create families. The Virginia Company subsidized the passage of 150 well-delineated women from England, for whom the planters paid 150 pounds of tobacco for each. Unfortunately, several of these new wives did not survive the massive Indian attack of March 22, 1622.

1622-23 was another Starving Time, and contributed to King James I’s decision to dissolve the Virginia Company in 1624 and Virginia’s new status as a royal dominion or colony, still to be based on tobacco.

Lt. Governor Marty Sommercamp announced that the June 27th Annual Meeting at the San Diego Yacht Club will feature the Society’s Executive Director Bonnie Hofmeyer, who will discuss The History of the Churches in Jamestowne.