Our Fall 2016 Meeting Had a Romantic Twist

Our speaker was Professor Stewart Davenport, who received his Ph.D., in History from Yale University and is an Associate Professor of History at Pepperdine University. 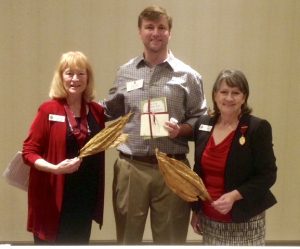 Governor Scarlett Stahl with Professor Stewart Davenport, our speaker, and Lt. Governor Julie Plemmons. Both Scarlett and Julie are holding the tobacco leaves, which were grown and provided as decoration by Historian Jim Shepherd.

His presentation was on Tobacco in Colonial Virginia: From Boom to Bacon’s Rebellion. Table decorations included real dried tobacco leaves, which had been grown by our Historian, Jim Shepherd and little tobacco bags filled with candy, which were provided by former Governor Donna Derrick and Lieutenant Governor Julie Plemmons. [Ed. Note: Dr. Davenport’s remarks complemented Jim Shepherd’s recent account of his experience as our Company’s only tobacco planter.]

The minutes from the May 21 meeting had been emailed to all members and the Secretary received no corrections or additions.  There were no objections, and the minutes were filed as approved.

Erica Hahn, Secretary, read the Treasurer’s Report as well as the proposed 2017 Budget in the absence of Treasurer Suzanne Leif. These were voted upon and adopted.

Chaplain for the Day, Claire Murphy, reported that our Chaplain, Sandra Orozco was home from the hospital after her fall. 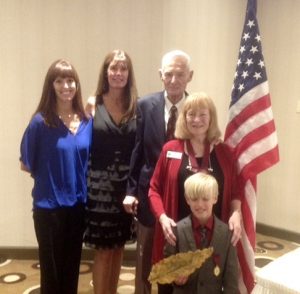 The Shepherd family presented a new U.S. flag and pole and a matching pole for the Jamestowne Society Flag, as a  gift to our First California Company, which was met with applause.

Parliamentarian Martha Gresham, as a member of the Bylaws Committee, presented amendments to our Bylaws, which were voted upon and adopted.

In Jim McCall’s absence, Jim Shepherd gave a status report on efforts to Save the James.

Anne Stokes Moore is no longer Companies’ Chair and is now Historian. She has been replaced by Jane Congdon, who is now Regional Chairmen Coordinator, a new office to oversee the nine regions into which companies have been organized. Jane was also elected Registrar for the Society at the Fall meeting. Jane (“Xan”) Alexander is our Western Regional Chair; more information will be sent to all governors by their Regional Chairs, who now will liaison between the Society and companies in their areas.

The Jamestowne Society would like to honor our members who have served in the U.S. military and has created a new pin to recognize U.S. military veterans.  Governors are to compile lists of veterans in their respective companies. In late February or March, the nine Regional Chairmen are to receive those reports from the governors. Jane Congdon will then compile them to create the Society’s complete veteran list. This is ongoing project and names will continually be added just before each national meeting for updated lists at the meetings. 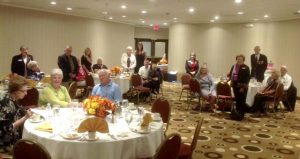 John E. Cahoon #6569, Chief Petty Officer, U. S.  Navy Reserve, Retired Served aboard the USS Essex CV 9 (Carrier Vessel), during WWII and during the Korean War as well. He stayed in the reserves and retired after 24 years.

Lieutenant Governor Julie Plemmons advised that our next meeting will be on February 18, 2017, with a Los Angeles-area venue to be advised.

The meeting’s Romantic Twist: Scarlett Stahl and Jim Shepherd announced their engagement, and she slightly sheepishly showed off her engagement ring. 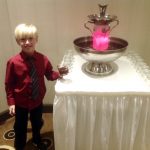 Our youngest member, Lucas Lapp (seven years old) holding tobacco, which was the theme of the speaker’s address.