Posted on November 4, 2011 by The Editor
By Scarlett Gathings Stahl
(Editor’s note: On August 10, 2010, we posted Mary Weisiger Andeen’s account of her family’s Pocahontas Cameo Brooch. Scarlett Gathings Stahl, another Pocahontas descendant, here recounts how she discovered and has celebrated her heritage. We welcome your accounts of discovering your Jamestown ancestors.) 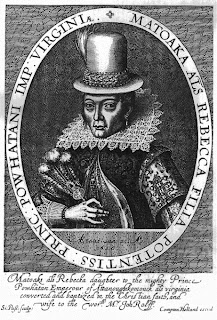 My mother’s father had died when she was young and she grew up with her mother and two siblings in her paternal grandparent’s home. Her grandfather, Christopher Bland Proctor Sr. had been born in Petersburg, Virginia in 1865. He had told her a great deal of the family history, including that they were cousins to Thomas Jefferson, Robert E. Lee and John Marshall of the Supreme Court as they were all descended from the Randolphs of Virginia. But more importantly, he told her that they were direct descendants of Pocahontas. Now that is something I have known all my life, but only a few years ago did I become interested in proving my heritage. An Irish friend of mine had asked “How are you related to all this American Royalty and that started my search?”

I began my odyssey with the Daughters of the American Revolution, which I now belong to and found that it really was easy for me in my search for proof. I had my birth certificate and my mother’s death certificate. I found the death notice on the computer for my grandfather and was able to obtain my great grandfathers death certificate from the Tennessee Dept of Records. All of these documents listed the names of their parents. My great grandfather’s mother was Rachel Magdalene Bland (Proctor was her married name). And the Library of Virginia had a complete set of documents on the Bland family, which went back to Richard Bland I.
Richard Bland I married Elizabeth Randolph (daughter of William Randolph and Mary Isham of Turkey Island)
Richard Bland II married Ann Poythress
Richard Bland III married Mary Bolling (great great great granddaughter of Pocahontas and John Rolfe)
Richard Bland IV married Susannah Poythress
John Bolling Bland
Rachel Magdalene Bland married James Drury Proctor of the Prince George Cavalry in the Civil War
Christopher Bland Proctor Sr
Christopher Bland Proctor Jr
Ethel Norton Proctor (Gathings)
Scarlett Gathings (Stahl)
And after I joined the DAR, I became close friends with Sandy Krutilek, who is a distant cousin through the Poythress family!!!! Sandy suggested I join Jamestowne Society as both she and her husband, Scott, belong as well. And the book “Adventurers of Purse and Person”, luckily had the Bland family listed as well as the Bolling family so that made it even easier for me for me to join Jamestowne Society. Since I had proven my lineage thru Richard Bland I and Elizabeth Randolph, it was easy to prove that her father was William Randolph and that he owned land for me to join Colonial Dames of the XVII Century. So in two years I joined DAR, Jamestowne Society Colonial Dames of the XVII Century and UDC as well as proved a separate ancestor for my daughter to join DAR. After five forms completed, I am researched out!!

This past May I went on a family pilgrimage to Virginia for a week and loved every minute of it. I had made arrangements ahead of time so that I had access all the places that I wanted to visit. The curator, E. Lee Shepherd, at the Virginia Historical Society in Richmond had taken my family portraits out for me to view and photograph in their Archives and also took me on a tour of the Museum. The owner of private property, where the Randolph family grave site is twenty miles south of Richmond, drove down to let me visit. He told me that is the oldest family grave site in the United States and is maintained by the Henrico Historical Society. Additionally he told me that the Randolph home no longer exists as it was sold to General Pickett of the Confederate Army and that the Yankees gunboats sat in the James River and fired cannon balls into the house until it caught fire and imploded like the World Trade Center. My response was that Al Quaida had nothing on the damn Yankees.

Next were Williamsburg and a visit to another Randolph family home, Peyton Randolph, first president of the Continental Congress and then down to Jamestowne with the museum there in a search for Pocahontas and John Rolfe. Lastly was a visit to Petersburg and nearby family related areas where a gracious lady, Jacqueline Hudson, who is the registrar of the Frances Bland Randolph Chapter of the DAR in Petersburg, was my guide to Jordan’s Point where the Bland family grave site is and to Blandford Cemetery to visit the Bolling mausoleum, and other sites. I was her guest at the DAR meeting and told the ladies that I would like to become an associate of their chapter as my family was from the area. When I mentioned the family names were Rolfe, Bolling, Bland, Randolph, Poythress and Proctor, one lady exclaimed that I was related to most of the ladies there. Then I told them that is why I want to become an associate member, that I want to learn more about my roots and meet my cousins.  One lady told me that she is a white Pocahontas descendant and shared with me the story of the Red, White and Blue Pocahontas descendants. She said she is a white as she is a wanna be. She is descended from John Rolfe but not Pocahontas, I am a red as I am a real Pocahontas descendant being descended from Pocahontas and John Rolfe. The blues are bogus as they have no claim of descent.

I had a wonderful time and intend to return to Virginia for more pilgrimages. In fact I already have planned a visit to Monticello in December as it should look lovely decorated for Christmas and as I said, Thomas Jefferson is another Randolph cousin.
This entry was posted in Early American History, First California Company, Pocahontas. Bookmark the permalink.

1 Response to POCAHONTAS and RELATED FAMILY