Governor Donna Derrick and George Horne reported on their experiences in staffing our booth at the 2015 Southern California Genealogical Society’s’ annual Genealogy Jamboree on June 5-7 . They were joined by Scarlett Stahl (who made the arrangements) and Julie Plemmons.

The Jamboree was both what was expected, but also not. The Jamestowne table had lots of visitors when the exhibit hall opened Friday. Many people were waiting to come in and often more than one would be there to chat or look at the ancestor list.

There seemed to be more people there on Friday afternoon than on Saturday or on Sunday, which was surprising because Saturday was touted as being the big day.

People were attracted to the booth, and we tried to pull them in with the opening “Do you have any Virginia Ancestors?”  Most people would stop and say, “yes, one or two”, or maybe would say “lots”. We gave our brochures to everyone who stopped by and seemed interested or thought they might qualify.  We had ancestor lists from the current website for them to look at; most did so, as well as the Adventures of Purse and Person for them to look at.

Nineteen signed our sheet that they would be interested in membership and attending a meeting. Those who thought they might qualify were glad to give their e-mail addresses. None are members and it will take lots of work to get them to apply, although most have knowledge of lineage societies.

Our “Down To The Wire” poster about stopping Dominion Power’s proposal to put power lines across the James River got lots of attention. Everyone was shocked by the thought of the adverse effects of the transmission line towers, whether or not he or she had any VA connections. Everyone who stopped was told about the issues.  They were given a flyer (about 175) and said they would go to the website and sign the petition.

LAtalk Radio’s Sheri McNeil Savory interviewed George about the Society. She emphasizes genealogy and DNA on her shows and will play her Jamboree interviews over the next month. Her website is LAtalkradio.com/Savory.php.

Ancestry.com interviewed Donna about the Dominion Power issues, which may be posted on their website, with other heritage groups.

We hope next year we can all reduce our workload to a ½ day, which would be much better. 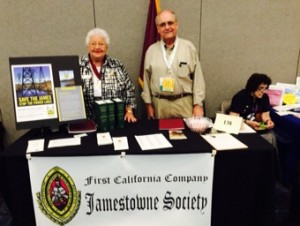 Governor Donna Derrick and George Horne at our booth. (Photo by Joanne Murphy) 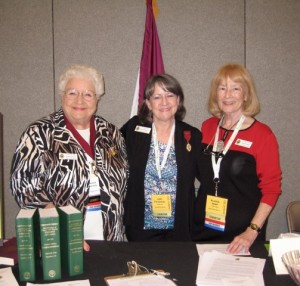