When the first settlers came to Virginia in 1607, their main problem was food; the 1609-10 winter was known as the Starving Times. They had trouble trading with the local Indian tribes for food.

It is not mentioned in history books, but they must have had an area like Boston Common; a place where they could raise a garden and pasture for livestock.

The Spanish were already selling tobacco in Europe. The first plant was brought to England in 1565, and by the 1610’s there was a ready market in England, especially for Spanish tobacco from the West Indies.

The local Indians raised tobacco for ceremonial purposes, but the English did not care for its bitterness. In 1611, John Rolfe, who would marry Pocahontas, obtained some Spanish seeds from a ship’s captain. By 1612, he was growing a hybrid of the sweeter Spanish tobacco and the local variety, which would be then known in England forever as the Virginia blend. The exact location of his crop was is not known, but it was probably on Jamestowne Island.

In 1619, the first General Assembly enacted requirements for the inspection of tobacco and mandated the creation of port towns and warehouses.

In the meantime, the settlers found that tobacco would grow well in Virginia and sell profitably in England. This was wonderful news, considering that many of the Jamestown colonists had died or suffered miserably as their farming efforts had been relatively unsuccessful. The potential cash value of tobacco soon captured imaginations throughout Virginia and the greater Chesapeake. They began to plant it in every available clearing, from fields to the forts and streets of Jamestown and, eventually, much of Tidewater Virginia. “Dominating the Virginia economy after 1622, tobacco remained the staple of the Chesapeake colonies, and its phenomenal rise is one of the most remarkable aspects of our colonial history.”

If you have ever been involved in clearing land of trees, you know it is a difficult task. Removing a stump from your yard with modern tools is a lot of work. The early settlers had only hand tools. They would have cut the trees for building materials and firewood and left the stumps. They would “ring” the trees to kill them, let light in, and then cut them down later. In the meantime, they planted crops around them.

When I was 9 to 12 years old, I lived on a small farm in Western Montana. We had an area that the trees had been cut down and the stumps left. My mother wanted to expand the hay field. 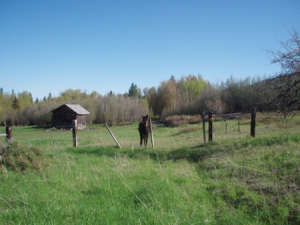 I spent all winter of 1950-51 burning stumps. A few times I could talk the neighbor out of some dynamite. That was fun; break up those big pine stumps and they burn faster.  Behind the hay barn at right is where the small trees were that I cleared. It seems to me that, in 2014, the old mule came to check me out and get a nose pat.

In early Virginia, the settlers built small mounds to place the seeds on and covered them with brush. It was not the pretty cultivated land you see today.

Eventually the stumps would rot out or the settlers would burn them during the winter.

Tobacco is labor intensive. Each slave or indentured servant working on a tobacco plantation in colonial days may have planted, weeded and harvested about two acres of cleared land with 9-10,000 plants, requiring bending over perhaps 50,000 times.

Tobacco wears out the land, exhausting minerals and nutrients from the soil. The first Virginia colonists to acquire ownership of land were in a position to gain great wealth, as they could abandon old fields and plant in fresh ones that would produce great quantities of the crop. The old land would take 10-20 years to recover.

Here is a typical description of a land patent: “Scarlett’s Choice. 400 acres lying south of the James River between the third and fourth creeks below the falls.” The falls of the James River prevented ships going any further upstream.

They needed land and labor. Importing indentured servants for head rights provided them with 50 acres for each one, which created both a labor force and more land to cultivate. The supply of interested immigrants from England declined after the end of English Civil War and when Charles II reclaimed the throne in 1660. Religious and economic refugees were recruited from France and Germany. They had to be Protestants, as Virginia required that they had to attend the Anglican Church. That often meant that they were French Huguenots; many Huguenots had fled to Germany, where they intermarried, and emigrated to Virginia. By 1700, it was clear that the Virginia leaders had committed to getting their labor from Africa. Virginia had a strange law. If your mother was a free woman, you were born free; it did not make a difference who your father was. Something was going on behind the barn. Inter-racial marriages were against the law and, in many states, until the 1970’s.

You have to continually pick off the tobacco worms.

I had a friend that grew up in Tennessee. Her father raised tobacco. Every morning, she and her little sister took a coffee can of soapy water to the field. They went down every row picking tobacco worms. When they were finished, they made a count to see who the winner was that day. They could then tell their father. She who won received the most praise that day.

In addition to that, once the plants want to bloom, you have to remove the flower stems (suckers), so they devote their energy to the leaves. They grow back about as fast as tobacco worms multiply. 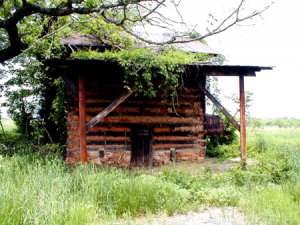 I have lived in Virginia, traveled through NC and SC. I have seen tobacco growing but never in bloom. Two years ago I raised some to see the flowers. I have a 17th century yard, bare dirt, flowers and aloe. 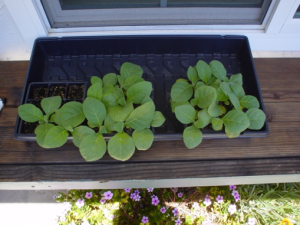 Moved outside to harden 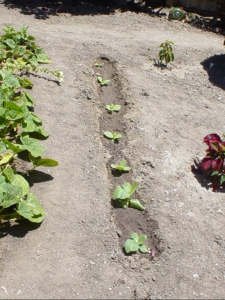 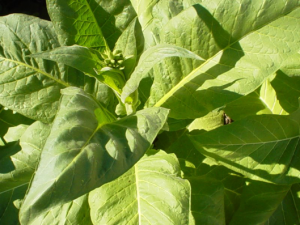 Getting ready to bloom and a bug bite 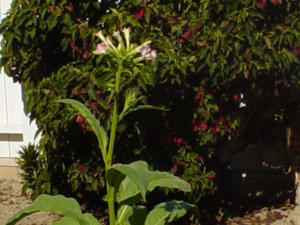 What I went through all the work for 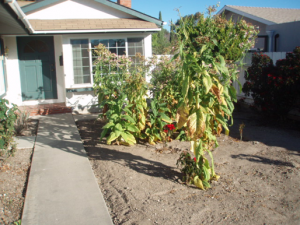 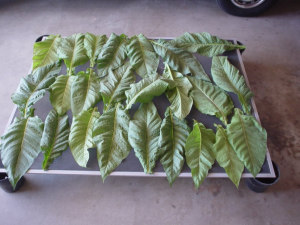 You can sun dry or air dry, I did both. I started to see little holes. Eggs hatching little worms!!! 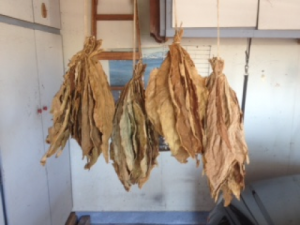 These are hands; when they are limp, an expert can use a leaf to tie them together

My daughter-in-law’s father was born and raised West Virginia. His father had a tobacco patch. He was the oldest son and worked with his father as long as he can remember. As the oldest son he had to sleep in the tobacco barn during the winter to keep a fire going so it would continue to dry and cure.

When he graduated from high school, he joined the Navy to get away from all of that.

I may be the only tobacco planter in the Company or have seen it in bloom. It is labor intensive.  I could fix everyone up with at least 50 seeds. 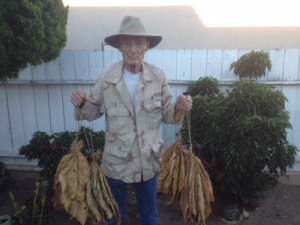 The only tobacco planter in the company