Posted on December 14, 2010 by The Editor
By Martha W. McCartney 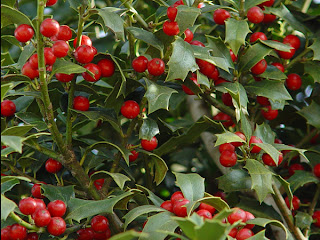 Although no written records have come to light describing how colonial Virginians decorated their houses-of-worship during the Christmas season, at least one English song makes reference to the “Holly and Ivy, Box [boxwood], and Bay, Put in the Church on Christmas Day.”  Poems, carols, and artwork reveal that homes, taverns, and even the streets often were adorned with greenery, a longstanding custom.  Historians surmise that the usual English decorating traditions would have been transplanted to Virginia.
Holly, which grows abundantly in Virginia, was used to decorate fireplace mantles, was tucked into vases, and fashioned into wreathes that were hung indoors or out. Other native plant materials also would have been used.   The Christmas season, which began on December 25th, ended on Twelfth Night, January 6th.  The twelve days of Christmas were festive and often included elaborate parties, formal balls, gaming, horse races, and weddings.  Houses great and small were crowded with guests and near-neighbors who came for the merrymaking, which sometimes lasted for several days.
Some people believed that it was unlucky to leave holly decorations up after Twelfth Night or Epiphany, but others were convinced that the prickly branches should be saved, to attract good luck or as some thought, to prevent lightening strikes.  The English and their colonists used the Julian or “Old Style” calendar as did other Protestant countries. It wasn’t until 1752 that England officially adopted the Gregorian or “New Style” calendar, which Roman Catholic Europe began using in 1582 because it conformed more closely to the solar year.  It is the date-keeping system we use today. Some Orthodox communities of faith celebrate Christmas on January 6th, the Gregorian calendar equivalent of December 25th.
About the author:

Martha W. McCartney is a research historian and author of several books relating to the early settlement of Virginia. She was the featured speaker at the October meeting of the First California Company of the Jamestowne Society. Her books include Virginia Immigrants and Adventurers 1607-1635: A Biographical Dictionary, and Jamestown: American Legacy.