Our First California Company of the Jamestowne Society has been a part of The Southern California Genealogical Society’s Genealogical Jamboree in Burbank annually for many years. The Jamboree lasts three days and costs $150 for a table, with hotel rooms for out of town participants at an additional cost. It has been difficult to find enough people to man the table for three days and we did not get enough traffic to justify the cost. I investigated and found we could have a free table for one day in the corridor, which we have now had for the last two years. In addition, I found that being in the corridor, instead of the main hall, we were able to attract more visitors going to and from classes, while having more space between tables for set up. I also arranged for our table to be next to United Daughters of the Confederacy and the National Society of Colonial Dames of the XVII Century as we have members who belong to all three. The visitors, who were attracted to one table, would also visit the others and we were able to cover each others’ tables for lunch or breaks. This made three similar heritage tables side by side to attract visitors,

I have helped man our table for four years. This would have been my fifth year, however, two days prior to our participation, my husband and your historian, Jim Shepherd, suffered an emergency and was admitted to the hospital with pneumonia, pleurisy and complications. For this reason, Jim and I were unable to attend. This was to be and is my last Jamboree. I am happy to report, though, that Sandy Krutilek has agreed to take over my responsibilities in the future re Jamboree as she has participated yearly with her husband, Scott, who is no longer with us. She is most qualified and able.

Thank you, Sandy, and thank you to all for allowing me to serve. 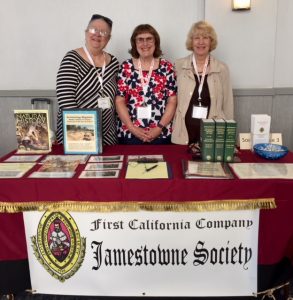 Pictured are from L to R Susan MacWilliams, United Daughters of the Confederacy Nancy Hippert, NS Colonial Dames of the XVII Century and Sandy Krutilek, First California Company of the Jamestowne Society