We had 36 in attendance, 20 of whom were members of the Society and First California Company, plus nine guests and seven prospective applicants. Chaplain Sandra Orozco delivered the Invocation and Councilor and Past Governor Donna Derrick led the Pledge of Allegiance to the Flag of the United States of America; the attendees then introduced themselves. 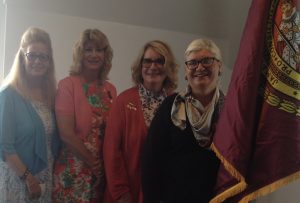 FCC welcomed our new members; from left to right: Lori Darnell; Denise Lonngren; Susan Astarita; Kathleen Beall. The new members introduced themselves to the group and shared some info about their Jamestowne ancestor. There also were six prospective applicants in attendance, so we are looking forward to some additional new members soon.

Bonnie M. Harris, Ph.D. made a presentation on A Foundation for Revolution: The Intersection of Religious and Civic Life in Jamestowne, 1607 to 1777. She related how the Virginia Statute for Religious Freedom was a statement about both freedom of conscience and the principle of separation of church and state. Proposed first by Thomas Jefferson in 1777 and passed by the Virginia General Assembly on January 16, 1786, it was the forerunner of the first amendment protections for religious freedom, which was considered a natural right that could not be infringed upon. Religious tolerance and freedom were not practiced in early to mid-17th century New England and Plymouth as the Puritans had created what was essentially a theocracy, but were given more leeway in Virginia.

She traced the 300-year history of religious dissention that began in the 16th century, down through the English 17th century colonization of Ireland to impose conversion through exploitation, the wars among the English, Dutch, French and Spanish in the 17th century and the establishment of Virginia as a royal colony in 1624, when the General Assembly openly tolerated other sects and dissenters. Religion was governed locally by vestries in Virginia as no Anglican bishops were seated. The governing elite consolidated religious and civic issues and tolerated religious diversity, which fostered civic dissent. Our Revolution actually began in the 1760s with a change in general religious sentiment during the French and Indian War and violent reactions to the Stamp and Declaratory Acts, leading to Virginia’s 1786 enactment of the Statute and, soon after, adoption of our First Amendment in our Constitution in 1789.

Lieutenant Governor Plemmons then read Governor Shepherd’s report and announced that the next company meeting would be scheduled when the new Council arranges it.

The membership ratified the findings in the Financial Review Committee’s report by Jim McCall and Jim Shepherd that had been accepted by the Council earlier. Treasurer Suzy Leif presented her report.

Jim McCall reported that the National Parks Conservation Association, National Trust for Historic Preservation and Preservation Virginia had jointly filed new appeals of the DC Circuit Court decision in favor of the US Army Corps of Engineers permit to allow Dominion Energy to begin construction of the towers across the James River near Jamestown.

Jim McCall reported on plans for the Society’s 2019 commemorations to mark the 400th anniversary of the first representative legislative assembly in North America, as well as the arrival of the first recorded Africans to English North America, the recruitment of English women to help establish families among the male settlers to bring stability to the colony, the first official English Thanksgiving in North America and the entrepreneurial and innovative spirit of the Virginia Colony. Commemoration events’ meetings have been moved from May to July 27-30 in Williamsburg. Details will appear in the forthcoming Society Magazine.

Nominations Committee Chair Suzy Leif reported out nominations for the 2018-2020 Council and the membership elected the following:

Bylaws Committee Chair Jim McCall presented revisions and amendments to the bylaws that the membership acted upon. 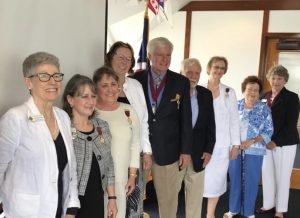