Captain John Smith’s iconic shadow still falls over Jamestown 400+ years after his 34-month sojourn in helping to found it. That specter is replete with mythology about a certain prepubescent Powhatan girl, disciplining settlers and facing down indigenous chieftains. 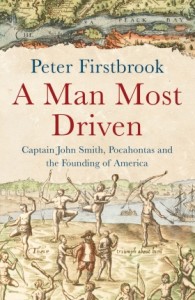 A new and readable biography helps to brighten that shadow and add human dimensions to that icon: A Man Most Driven; Captain John Smith, Pocahontas and the Founding of America, by Peter Firstbrook (also available from Amazon).

Firstbrook acknowledges that he relied heavily on the seminal works on Smith by Bradford Smith and Laura Striker and Philip Barbour. But he also used his journalistic skills and new, original sources in describing more obscure episodes that Smith chronicles in his writings, such as his birthplace and early life, soldiering adventures in Eastern Europe and escape from slavery from Turkey through Russia. He enhances them them with illustrations from Smith’s works and maps. We learn more details about the captain’s dealings with his fellow settlers and the Powhatans (and their perspectives on him), his explorations and naming of New England and, finally (though briefly), his final decades of reflection in England.

This is a worthy addition to anyone’s library collection on Jamestown. It is a fitting complement to the superb The Jamestown Project by Professor Karen Ordahl Kupperman (on our Reading List, to which we are adding this work).

“A nuanced account of the English captain saved by Pocahontas reveals an astonishingly complicated personality.

“Former BBC producer Firstbrook (The Obamas: The Untold Story of an African Family, 2011, etc.) finds in the roguish, quarrelsome, fearless adventurer Capt. John Smith a sterling example of the tenacious early-American character. Before the 27-year-old Smith ever came to Virginia to make his fortune in 1607, he proved himself an ambitious knight-errant, as he later recounted in his autobiography and elsewhere.

“A Lincolnshire tenant farmer’s son, Smith wanted to find adventure rather than inherit the family farm when his father died, so he became a mercenary sailor fighting the Spanish, making connections to better himself and filling the gaps in his education. His adventures took him across the continent, from Spain to Austria-Hungary, where he enlisted to fight against the incursions of the Ottoman Empire, battling duels to the death and even being taken captive and enslaved by the Turks. Having escaped and returned to London, he ingratiated himself with British merchants hoping to capitalize on the recent discoveries in the New World, such as the ill-fated Roanoke Colony of Virginia, sponsored by Sir Walter Raleigh.

“Resentful of the aristocrats in control of the London Company–funded expedition, Smith managed to get locked up for mutinous behavior during the trip out, and only his much-needed skills as a soldier and farmer kept him from being hanged once they arrived in Jamestown.

“Firstbrook gives Smith the benefit of the doubt in his account of being saved from the Powhatans’ chopping block by chief Wahunsenacawh’s favorite daughter, Pocahontas—as befits an intrepid leader who was fiercely committed to the New World effort and instrumental in its survival over the first two murderous winters.

“From the evidence of his own writings, John Smith has a claim to be the foremost Founding Father of the early British presence in North America. But there is controversy about how reliable a witness he was. Some facts are independently documented, like the time he spent leading the Jamestown settlement and his later trip to New England where he mapped and named much of the coastline – the same map that guided the Pilgrim Fathers six years later to Plymouth Rock.

“Peter Firstbrook approached the controversy over Smith from a reverse direction. In this book, he attempted to check the veracity of Smith’s own autobiography of his life as a mercenary fighting the Ottoman Empire before his American expeditions. If the apparently fanciful accounts of shipwrecks, duels, battles in the political snake pit of Transylvania and his escape from slavery on the eastern shores of the Black Sea were probably true, this would give credence to Smith’s reports of what happen later in his life in America. His researches took Firstbrook into the troubled heart of Eastern Europe, where he provided new insights and evidence of Smith’s likely progress.

“In concluding that Smith was probably an honest witness of a turbulent time, Firstbrook gives a new perspective on the realities of the Jamestown settlement. Applying information about the local Native American social and political structures at the time, he offers an explanation about a seminal moment in early American history, the intervention of Pocahontas in Smith’s impending execution. Alas, this does nothing to support the Disneyfied romance story between a twelve years old girl and a grizzled 27-year-old soldier.

“This book presents a fascinating account of the detective work needed in historical research in going back to the original source materials and validating the contents. Whilst the (necessary) accounts of the complexities of Balkan history are not an easy read, they are essential to proving that John Smith was not a fantasist. Thus, Smith’s own writings and maps endorse him as a very significant contributor to early American history.”