Adding A New Qualified Ancestor and A Daughter as New Member

Harry Holgate, our outgoing Treasurer, has been a genealogical researcher for over three decades and makes use of many of the resources that can be found at the Southern California Genealogical Society’s 2014 Jamboree in Burbank on June 6-8.

Most recently, Harry used his skills to add a new Qualified Ancestor, John Hodsoll, to the Society’s Index of individuals who can be used for membership eligibility. Hodsoll was one of the “adventurers” or investors in the Virginia Company of London. He was in Harry’s lineage, but not the ancestor he used to join the Society about ten years ago (Thomas Graves).

Harry’s membership in a variety of lineage societies has been of great value in finding, following, validating and confirming links, names and sources in his ancestral searches.

With genealogy as his avocation, he avidly uses books and other resources such as the SDGS library in Burbank, the City of Los Angeles genealogical section in its main downtown branch, and LDS Family History Centers in Orange County and in West LA (see the Join Us page on our web site for links).

In reading one of those resources, The New England Historic Genealogical Society Register, he saw an article in its April 2010 issue about “Bennett Hodsoll, First Wife of Edmond Freeman of Sandwich, MA.”

His memory was tweaked that a Hodsoll was in his own lineage, so he investigated further. The article said that John Hodsoll was the father the deceased Bennett, and was a gentleman of Sussex. Harry enlisted the help of the NEHGS research group that led him to John Hodsoll’s name in the Third Charter of the Virginia Company, as listed among its investors in The Conquest of Virginia; The Third Attempt 1610-1624. Hodsoll thus met a Society criterion enabling him to be a new Qualifying Ancestor. 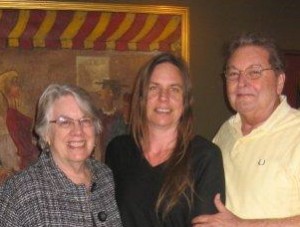 Harry then sponsored his daughter, Brandynne, for Society membership using John Hodsoll as a new QA, who was recognized by the Society on November 26, 2013, three years after his quest first began. Congratulations to Harry and Brandynne! You can learn about many of the resources that Harry uses at the SCGS Jamboree by looking though its program and list of exhibitors.

Harry and his wife, Susan, will be at our exhibitor’s table (#126) to offer information and advice about Society membership on Friday, June 6. Scarlett Stahl and The Krutileks, Scott and Sandy, will be there as well on following days. Please stop by to introduce yourself and greet them.