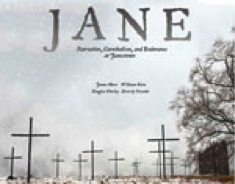 The First California Company will hold its annual meeting Saturday June 28, 2014 at the Rancho Santa Fe Golf Club in northern San Diego County. Members and guests are welcome. This will be a good opportunity for prospective Jamestowne Society applicants to meet members and learn what the Society’s Southern California company is doing.

The luncheon will begin at noon and conclude by 3 pm after a business meeting and a showing of the documentary “Jane.” A slate of nominees to serve as the Company’s Council for the next two years will be presented to members for a vote.

In late July of 2012 archeaologists working at Jamestown Fort made a startling discovery. The partial skeletal remains of a young English woman were buried in a 400-year-old cellar. She was named “Jane” by those respectfully seeking to understand her fate. Careful forensic analysis of her bones revealed that she had been cannibalized, confirming written reports of such incidents from “The Starving Time”, the winter of 1609-1610. This discovery has, for the second time in four years, placed Jamestown in Archaeology magazine’s list of the Top Ten Discoveries of the Year from around the world. The earlier listing was for the discovery of the 1608 Church. As Archeology reported, “evidence for cannibalism at Jamestown revealed what a perilous enterprise the colonization of the New World was, and on what tenuous ground the fate of the American colonies rested”. We will screen a film narrated by Dr. William Kelso, which details the work of his team in the Jane discovery and the analysis that led to these conclusions.

Members will receive a meeting notice and invitation by the end of May. Others may send inquiries to the Governor. The deadline for reservations is Monday, June 23. You can make yours by sending a check for $35 per person, payable to First California Company, Jamestowne Society, to Treasurer Harry Holgate at 115 West Fourth St., #208, Long Beach, CA 90802. Please include a note with your name (and any guests), street address, phone number and e-mail address, and your entrée selection: salmon, Baja Taco salad or vegetarian.

Please note that the club is the Rancho Santa Fe Golf Club, located at 5827 Via de La Cumbre in Rancho Santa Fe; click here for directions. The Solana Beach Amtrak station is about six miles away. The Club’s phone is +1 858-756-1182; other details are found at its website.

This is a beautiful setting for socializing with friends. I hope you can make it!