Ed. note: We thank past Governor Ginny Gotlieb for filing this report on the Society’s 2014 fall meeting and tour:

The Jamestowne Society’s Fall meeting and tour were sold out events. 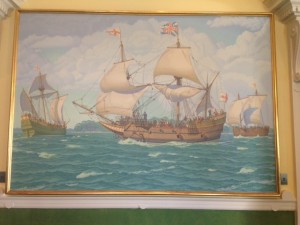 Two impressive paintings of Jamestown scenes highlighted Friday’s tour of the newly restored Virginia State Capitol. There was also an interesting story of a royal mace that is ceremoniously brought to the House Chamber when the House of Delegates is in session. I encourage you to see the virtual tour of this historic building that houses the oldest representative assembly in the Western hemisphere. A painting of the three ships landing at Jamestown and portraits of Captain John Smith and Pocahontas hang in the Old Senate Chamber and are included in the virtual tour. 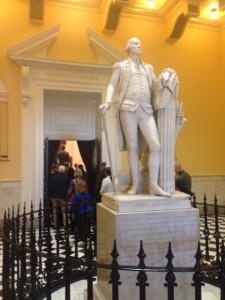 Under the Rotunda is Virginia’s Hall of Presidents with busts of those who have served our nation as president. In the center is a life-sized statue of George Washington, made from the only castings and measurements ever taken of Washington. Thomas Jefferson selected the famous French sculptor, Jean-Antoine Houdon, who spent two weeks at Mount Vernon to prepare for this work. The Capitol tour’s description sums up the statue’s message: “The artist carefully balanced the military and civilian elements of Washington’s career: his sword is by his side and he rests his left hand on a fasces (a Roman symbol of unity and civic authority), but he carries a civilian walking cane and stands next to a plow. Washington wears his Revolutionary uniform, but his head is uncovered and his facial expression is fatherly. Houdon’s monument to America’s foremost hero recalls Washington’s life as a soldier, statesman, and private citizen.”

“Give me liberty or give me death,” resounded from historic St. John’s Church as we sat in the pews. A dozen professional actors seated among us articulated the concerns of Virginia’s leading citizens as they debated their response to Parliament’s escalating oppression. How would they arm themselves and fund a militia? What likelihood of success did a military challenge have? One conservative delegate argued against rashness, reminding all that the goal was representation in Parliament, not separation.   Hearing Henry’s words in context made them all the more moving. They were a clear and impassioned statement and a considered statement, not the overwrought version sometimes presented by reenactors. This moving experience left us all with much to consider.

Our final stop was the John Marshall House, interesting for its architecture and place in the growth of Richmond and, of course, important because of Marshall himself. Marshall, our fourth Chief Justice, was nominated by John Adams and began his long tenure (1801-1835) just as Thomas Jefferson took office. Marshall and Jefferson were distant relatives, Randolph descendants, who did not particularly get along. One was raised in a modest farming family and died rich and one grew up as a planter’s scion and died with tremendous debt. Importantly, they held very different views of the proper scope of government. Marshall had served with Washington at Valley Forge and knew the difficulties of having independent colonies funding a single military. His opinions in cases such as Marbury v. Madison established the power of the judiciary as an equal branch of government and created many of the precedents that still guide the Supreme Court. Preservation Virginia owns and operates this site. For photos and addition information visit http://preservationvirginia.org/visit/historic-properties/the-john-marshall-house.

The tour group enjoyed dinner together Friday evening at TJ’s in the Jefferson Hotel.

Saturday’s elegant luncheon in the Commonwealth Club was also a sold out event. The social hour was lively as members visited and found new “cousins”. Jamestowne Society officers were elected. Maritime historian and author John V. Quarstein spoke on the history of Fort Algernon, a/k/a Fort Monroe, at Old Point Comfort.   It is a story of protecting Jamestown from the Spanish, of pirates, and of battles tied to the Anglo-Dutch Naval wars. Old Point Comfort is also the site of the landing of the first Africans in Virginia, captured from a Spanish ship, and the birthplace of William Tucker, the first African American. One of these twenty captured Africans, Anthony Johnson, sued for his freedom but the court ruled that he must remain an indentured servant. It wasn’t until the mid 1660’s that perpetual slavery was fully codified in Virginia law.

The entire weekend was fun! There is sufficient conviviality and learning to make Jamestowne Society events the anchor of a lovely East Coast autumn trip. 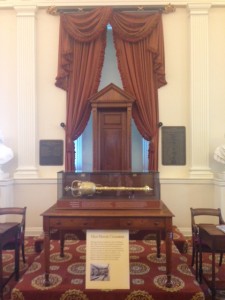 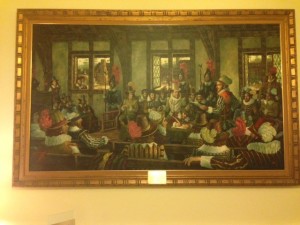 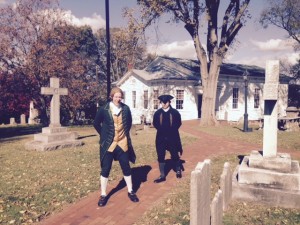 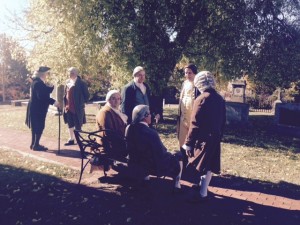