How many English women came to Jamestown by 1620?

We know that there were few women colonists in the first years of the Jamestown colony. As with almost all European colonies, men were the adventurers, going out into the wilderness with the idea of making their fortune and going home. 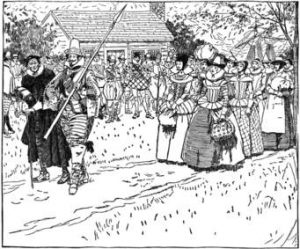 It is hard to get a firm figure as to how many women left England to go to Jamestown in the early years.  Except for a couple of ships, we don’t have passenger lists and the death rate in Jamestown was so high that it obscures the identities of the first women.  But we can get a handle on this.

On a recent visit I made to the Historic Jamestowne archeological site, our guide from the National Park Service explained that the men were not farmers. Although the 1606 Charter issued by the King to the Virginia Company of London commended it to Christianize and civilize the native population, most of the colonists came mainly to find gold, as the Charter authorized.

In England, women performed the important task of brewing beer. Beer was critical because in Jamestown, as in England, stream water was not safe. Almost everyone drank beer, because the brewing process produced a safe drink. Home vegetable gardens were also a women’s specialty, and we know how hungry the settlers got. Lack of women was a significant factor in the hardships of the first years of the colony.

We have passenger lists for the first colonists to journey to Jamestown.  The very first in 1607 included 144 men and boys, of whom 104 remained in the new colony. Only 38 were still alive when the first supply ship arrived in 1608.

The First Supply arrived with no women passengers. The Second Supply came in October of 1608. It brought 70 passengers, including two women, Mistress Forrest, the wife of one of the settlers, and her 14-year-old maid, Anna Burras. Mistress Forrest disappeared from records, probably dead, but Anna survived, married John Laydon and lived until at least through 1627.

Then, there is the Third Supply of 1609, the most famous of the supply convoys.  By this point, the Virginia Company of London, which established the colony, was actively recruiting family groups. Broadsheets were being circulated around England.

The Third Supply, for which we have no complete passenger list, was made up of nine ships, including the flagship Sea Venture. Historians have estimated that the convoy included 400-500 passengers, including somewhere between 30 to 100 women and children.  A count of about 40-50 seems reasonable to me.

Seven of that Supply’s ships, but not the Sea Venture, made it to Jamestown by fall 1609. One of the women of whom we know was Temperance Flowerdew.  She went back to England, but then returned in 1619 as the wife of Governor George Yeardley.  She later married Governor Francis West and remained in Virginia until her death in 1627.  Two others, Joan Peirce, and her daughter Jane, were the subjects of an historical novel.

The Sea Venture carried 153 passengers, which included women and children, e.g., the pregnant first wife of John Rolfe. She and the baby died on Bermuda. A reconstructed passenger list for the Sea Venture shows about 15 women, wives and servants. They made an unintended stopover of nine months when the ship was wrecked on Bermuda. Most of passengers and crew survived and finally arrived in Jamestown in May 1610 aboard two self-built smaller boats.

At this point, London was shocked with lurid stories of cannibalism and, in particular, one husband who, during the Starving Time, murdered his wife for his own consumption. 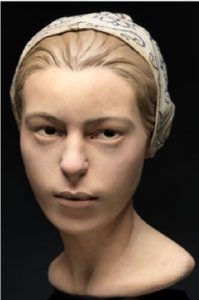 Those stories were somewhat doubted for over four centuries until 2012, when the archeological team at Jamestown made a stunning discovery of a partial skeleton, whom they named “Jane.”  She was a teenager who had died in the Starving Time and been butchered for human consumption. Doug Owsley, the Smithsonian Institution’s noted forensic anthropologist, and Jamestown Rediscovery’s William Kelso spent considerable effort trying to identify her. She appears to be of the servant class, rather than gentry. They do not think that she was the murdered wife.

With the May 1610 arrival of the Sea Venture’s survivors, the population of the colony was up to about 230. In June, three more ships, led by new Governor Lord de la Warr, arrived from England, just as the survivors were setting out to abandon the colony.  They were compelled to stay.  This would be the Fourth Supply.  Again, we do not know if there were women in this group, although that would have been likely.

More ships came over the next few years with mostly male passengers, but the population in Jamestown itself continued to decline. In August 1611, Thomas Gates brought in a fleet of three ships. The passengers included 20 women, including his wife and daughter but his wife actually died before landfall.

A researcher named Anne Stevens, on her site Packrat Productions, has created a source-based list called Pilgrim Ship and Passenger Lists, listing all the ships which sailed to Virginia and New England starting in 1607 through 1638 with reconstructed passenger lists when possible. Two examples of the information she provides show that the John and Francis arrived in November 1614 with 34 men and 11 women, and, in 1617, the Treasurer brought 11 men taken from the Neptune.  A number of the ships are shown as carrying only male passengers.

In 1616, John Rolfe reported there were 65 women and children in the colony in a population of 351. By then, the establishment of new settlements near Jamestown was underway. The Bona Nova left London in 1618 or 1619 with approximately 120 passengers, of which six were women, who then appear in the 1624/5 muster.

Not all of the missing was dead. Some settlers went back to England.  The Spanish ambassador to England in 1612 claimed that some 40-50 colonists had deserted the colony to take Indian wives and were living in their villages. It is hard to know if his claim is trustworthy.

On April 10, 1619, the new Governor Yeardley arrived with his wife, the former Temperance Flowerdew. Per one of Stevens’ reconstructed passenger lists, there were approximately 15 women on board his ship, again either as wives or servants.

Altogether in 1619, another 1,440 colonists were sent over.  Notably, the Margaret led by Captain Woodlief, arrived in late 1619 with 35 passengers for which we have a passenger list, all men.  Its arrival was celebrated with a Thanksgiving prayer service.

By the spring of 1620, there were just over 1,000 colonists in all of Virginia; not just in Jamestown but also in the surrounding settlements. Not all were English, mind you, as the Virginia Company had also been recruiting on the continent for skilled craftsmen since the colony’s inception.

On 3 November 1619, Sir Edwin Sandys, the newly elected presiding officer of the Virginia Company, proposed sending 100 marriageable “maids” to Virginia to ensure its stability and survival.  At this point, the Company undertook active recruiting of selected single females, complete with vetting of their qualifications and some very nice perks, clothing, personal goods, food and shelter when they arrived, and their choice of accepting or not accepting any of the men as husbands.

In May and June 1620, pursuant to the “Maids for Virginia” project, the first “maids,” 90 women arrived on the Jonathan and the London Merchant. In the next few years, more ships brought both single women and married women to Virginia.

In 1618, the Company made land grants to “Ancient Planters,” defined as individuals who had come before Governor Thomas Dale left the colony, i.e., 1616, who had paid their own passage, owned at least one share of Virginia Company stock, or were otherwise qualified. A list of those to whom the grants had been made was compiled in 1623 or 1624 when the colony was about to be turned over to the Crown. The list has been reconstructed and shows 149 Ancient Planters, including 15 women.

In March 1620, a general muster of all of Virginia was taken and showed 892 persons of European descent. About 6/7 of them were male. Also present were 32 Africans, of which 15 or 17 were female.

In June of 1620, Edwin Sandys submitted a statement to His Majesty’s Council reporting that at that point there were 1,200 people in Virginia who had come in the last year, and a thousand from earlier years. He refers to the new arrivals as men.

By 1625 most of the colonists were no longer living in Jamestown itself, but instead in neighboring settlements along the James river.  The 1624/5 muster roll of all of the settlements in Virginia, which was an all name census, showed 124 people living in Jamestown itself, out of a total population in Virginia of 1218, ¾ of which were male, i.e. there were about 300 females. Historical novelist Connie LaPallo, studying the muster, has concluded that 5 were women who had come as late at the third Supply, i.e., 1610. I too have looked at the muster to confirm her claim.

The 1624/5 muster took place after a major attack on colonists by the Indians in March 1621/22, which killed approximately 347 colonists.  Assuming the same percentage of women were killed as men, and the fact that most of the women in the colony at that point were later arrivals, it would not significantly affect my calculation as to how many women had come as of 1620. But as I said at the beginning, the awful death rate does make it hard to count how many women had come as colonists.

So, I calculate that, prior to the arrival in 1620 of the first “Maids for Virginia”, thousands of men had come to Jamestown but only about 100-150 women colonists.  There were only two women prior to the fall of 1609. The Third Supply brought perhaps 40 women. In the period from 1610 to 1619, while most of the ships brought no women, a few seem to have brought some wives and servants, often no more than one or two, and one or two bringing 10-20 at most. In 1616 there were 65 women and children in Jamestown. A generous estimate would assume that 50 women were adult women. Most of the sources are not wholly trustworthy but consistent enough on which to base a reasonable estimate. My estimate is also consistent with the award of land to Ancient Planters, 1620 muster, and 1624/5 muster, which showed very few women from earlier times.

This is my figure, but it is also similar to the estimate made by the National Park Service of 100 women had come to pre-1620 Jamestown.   And, obviously like the men, the vast majority of the women colonists met early deaths. Life was very hard indeed for the first colonists.

Kathleen Brown, “Women in Early Jamestown” Jamestown Interpretative Essays on Virtual Jamestown http://www.virtualjamestown.org;
Virginia Lee Hutcheson Davis, Jamestowne Ancestors, 1607-1699: Commemoration of the 400th Anniversary of the Landing at James Towne, 1607, Baltimore, 2006; on Googlebooks at https://books.google.com;
James Horn, A Land as God Made it: Jamestown and the Birth of America, New York, 2005;
William Kelso, Jamestown the Buried Truth, Charlottesville, 2006; and The Truth Revealed, Charlottesville, 2017;
Connie Lapallo, Dark Enough to See the Stars in a Jamestown Sky, Greyfox Press, 2006;
Edward Duffield Neill, Notes on American History, Vols. 9-12, Boston, 1876 on Google books;
John Smith, The Generall Historie of Virginia, New-England, and the Summer Isles, London?, 1624, republished Glasgow, 1907, on Internet Archive, at https://archive.org;
National Park Service, “The First Residents of Jamestown”, and “The Indispensable Role of Women at Jamestown,” at https://www.nps.gov/jame/learn/historyculture;
Lyon Gardiner Tyler, The Cradle of the Republic, Jamestown and the James River, Richmond, 1906;
Mary Newton Stanard, The Story of Virginia’s First Century, Philadelphia 1928 on Googlebooks;
Ann Stevens, Pilgrim Ship Lists Early 1600s at https://www.packrat-pro.com (she has carefully created a complete list of the ships to Virginia and New  England with passenger lists when possible, always citing her sources, such as the 1624 muster, Hotten’s lists and the research of Peter Wilson Coldham,  and a book called The First Republic in America by Alexander Brown, Cambridge, 1898, who claimed to have access to unpublished sources.)
Marcia A. Zug, Buying a Bride, An Engaging History of Mail Order Matches, New York, 2016.