Our Governor Reports on the Society’s Meetings at Williamsburg July 27-30, 2019

The Jamestowne Society rescheduled its 2019 spring membership and Council meetings from their customary May dates to July 27-30 to commemorate the 400th anniversaries of two major events in the colony’s history: the convening of the first General Assembly – now the oldest representative legislative body in the New World – and the first recorded landing of enslaved Africans in English America.

The meetings were a major success and, according to our Executive Director Bonnie Hofmeyer, “We had 400 at the luncheon, 280 on the tour[s], 230 at the governors’ dinner, and 290 at the wine and cheese reception. We had wait lists for all events. We could have had a lot more. The largest attendance we have [recently] had at a May luncheon is 310 and 92 at the governors’ dinner.” 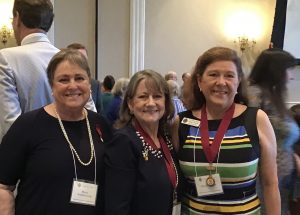 The First California Company was well represented at the Jamestowne Society’s annual meeting and celebration of the 400th anniversary of the First General Assembly.  In addition to myself and Lieutenant Governor Marty Sommercamp, Past Governor and current Jamestowne Society Councilor Ginny Gotlieb, Friend of the Company Valeria Toms, and Valeria’s granddaughter Kelsey Toms from Texas were in attendance.  The meetings were held at the Kingsmill Resort on the James River in Williamsburg as well as on the Jamestowne Island.

Marty and I took advantage of the early registration on Friday and enjoyed seeing the newly designed church pin available from headquarters. There is a new Register of Qualifying Ancestors, and, if you or a friend would like to inquire about an ancestor, please let me know.  While most of the information is readily available and more current on the society’s website, the Register will prove to be a valuable asset at our genealogy events.

Saturday morning started bright and early with the Council meeting.  While Ginny was a participant as a Councilor, I was allowed to observe but not participate in the discussions.  We are in good hands with our current Council and continue to have a healthy treasury to carry on the good works of preservation and research.  A $75,000 donation was approved for Jamestowne Rediscovery with $15,000 of the donation to be directed to the church belfry.  The executive committee will be reviewing previous letters of protest to the power lines and to take appropriate action as they deem necessary.  A DVD and book on the 400th Anniversary will be available in the coming months with notification in the next magazine. 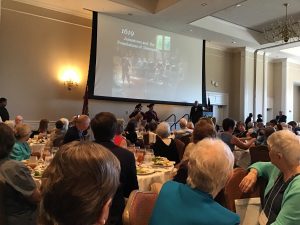 Two colonial representatives playing the drum and fife led the procession of the society’s Council and distinguished guests to the Annual Membership Meeting and Luncheon.  Special guests were the retired Rev. Chris Stone and his wife from St. George’s Church in Gravesend England, the final resting place of Jamestowne ancestor Pocahontas.

After an enjoyable lunch, Dr. Jim Horn, CEO of Jamestowne Rediscovery focused his lecture on the events in his book 1619: Jamestown and the Forging of American Democracy.  Although his remarks were similar to those presented at our June Company meeting, it is always a delight to hear him speak and we learn new tidbits about those early years on the island. 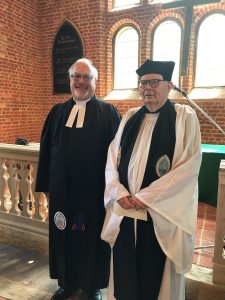 Sunday was a full day heritage tour on the island, beginning with a prayer service in the Memorial Church from the 1559 Book of Common Prayer.  Our Society Governor, the Reverend Dr. Roy Abbott Martin, Jr., and our Society Chaplain, the Reverend James Wilbur Browder, III, presided and the new church bell was rung.  It has a beautiful tone and several participants have put videos on the Jamestowne Society Facebook page for your listening pleasure.

We had lunch in an air-conditioned tent, however, with the high heat and humidity, it was not exactly California comfortable weather!  One must wonder and be amazed at how our ancestors managed through such difficult weather 400 years ago.  The lunch program included a portrayal of Mrs. Yeardley, wife of the Governor.  She assured us it was no picnic for the ladies in their finery during the summer of 1619.

Then, the highlights of the First General Assembly, which was held over six days in July and August of 1619, were reenacted in a living history interpretation.  It was interesting to hear the words of those first in attendance as well as the commentator pointing out that one of those in attendance actually passed away during the meetings. 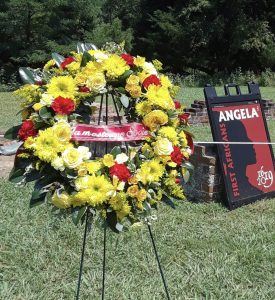 We then toured the New Town portion of the island and placed a wreath at the Angela site [where archeologists are seeking evidence of where one of the first recorded landed Africans has been found to have lived.]  Archeologists discussed the interesting artifacts that have been found in that portion of the island.  We were left on our own to explore the exhibits in the Archearium and the visitor’s center.

That evening was the Governor’s Dinner with a beautiful anniversary cake.  Noted archaeologist Dr. Bill Kelso made the first cut of the cake with a sword discovered on the island.  Glasses were raised in a toast to our ancestors who founded the colony of Virginia and ultimately the 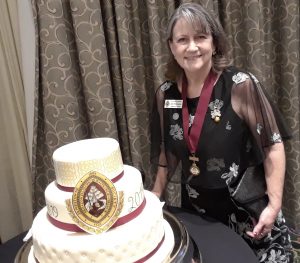 Monday morning was a company Governor’s forum where various items were discussed including the annual giving program, meeting attendance and programs, and regional correspondence or lack thereof.  Unfortunately, time was quite limited for discussion amongst the governors, but a sharing of company meetings, membership, and ideas were briefly exchanged.

Monday evening was a final Wine and Cheese Jamestowne Society event on the island.  In addition to the wine, a local brewery had used hops grown on the island for a new beer.  A dedication prayer for the new church bell was given by Governor Rev. Roy Martin.  And a toast was given to all our ancestors and those descendants of the General Assembly were recognized.

Due to the President of the United States’ participation in events at [the nearby] Jamestown Settlement, access to the island was limited on the actual day of the anniversary and we were disappointed to not be able to venture to the island that day.

Having attended the 400th Anniversary of the landing in 2007, this was an equally moving event and I was thrilled to represent the First California Company.  If you have any questions I am always willing to share my thoughts with you in person, by phone, or via email.  Thank you for your continued support of the Jamestowne Society and of our First California Company! 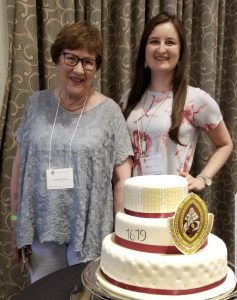 Here, too, is Val Toms’ report:

Going to our first Jamestowne event was planned for a year. I had just finished my granddaughter Kelsey’s membership application and she had just been accepted into membership of the Society.  Kelsey is an AP teacher of American History in San Antonio, Texas. Her special interest is colonial history. We share that love. She was exhilarated by all she saw and heard, and I know her classes will benefit! We loved every part—- walking into the beautiful church, saying the same words on the same spot as ancestors had done was a goosebumps experience.  I in particular loved hearing the thoughts of historian Mark Summers. “E Pluribus Unum“ will always mean more to me now. I think Kelsey was thrilled by the archeologists’ work. The chance to interact with them in the church, in the museum, and the Angela site, were especially exciting to her. We both loved the reenactment.  It was all so much more than we had anticipated. A wonderful first experience of what the Jamestowne Society is all about, and SUPPORTS!