We Learned About Democracy, Diversity and Race at Jamestown in 1619 at Our Company’s 20th Anniversary

We commemorated our Company’s 20th anniversary on June 29 in Irvine with an auspicious event presided over by Governor Julie Plemmons. 37 members, guests and prospective members heard a fascinating presentation by Dr. James Horn, historian, author and President of Jamestown Rediscovery, on Democracy, Diversity and Race in 1619 in the Jamestown Colony. 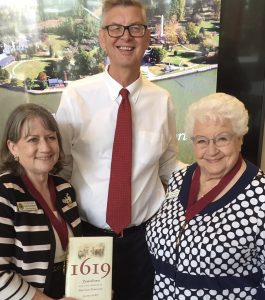 Governor Plemmons with Dr. Horn and Charter Member and Past Governor Donna Derrick

Based on his recently published book, 1619, Jamestown and the Forging of American Democracy, Dr. Horn’s themes were the reforms for the colony as initiated by Sir Edwin Sandys  (who had just become the chief officer of the Virginia Company), which included recognizing private property, the rule of law, self-government and the common weal. Chief among his plans was to turn the native people into English people, both by religion and by the way they were to live.

Self-government led to the creation a General Assembly of elected representatives (the basis of our own form of government) which met for the first time on July 30, 1619 in the 1617 church, now the site of significant archeological work. Those discoveries indicate that it was a classic Tudor church, semi-timbered with a belfry.

Weeks later, two ships arrived with their cargo, captained by two English privateers who had seized a Portuguese slave ship loaded with Africans that had been captured in Angola. John Rolfe, Pocahontas’ widower, would later report the landing in Virginia of “20. and odd Negroes,” who were “bought for victuals.” We know from records that one of the Africans was a woman called “Angela” and from other records we know where she was a “servant” on Jamestown island. That site is now also a major archeological site.  Thus, 1619 brought to the English colonial world democracy and diversity and slavery, legacies of which are still with us.

Dr. Horn commended the Society for the financial support we have given Jamestown Rediscovery over the years. 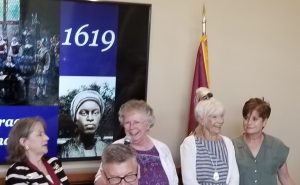 Three past Governors who were present offered their greetings and each gave a bit of history from her term of office. Joanne Murphy served 2008‐2010, charter member and current Society Councilor Ginny Gotlieb served two terms, 2010‐2014, and charter member Donna Derrick served 2014‐2016. Donna was followed by Scarlett Gathings Shepherd in 2016‐2018, who was not present.

Collectively,  the three past governors reviewed several important company events, including the June 2002 visit from now-Treasurer Emeritus Harrison Tyler, who spoke about Pocahontas, John Rolfe, the Harrison and Tyler lines and Sherwood Forest, our 2006 naming of the seventh race at Del Mar to help commemorate Jamestown’s founding, Society Governor Carter Branham Snow Furr and Mrs. Furr’s visit in 2010, and others among those listed on the Meetings page on our website.

They recollected the company’s achievements that included creating and maintaining our website, publishing a brochure, revising our bylaws and standing rules, participating in the Southern California Genealogical Society’s annual Genealogy Jamboree and fostering the organization of two new companies in California. Past Governor Gotlieb reflected on the pleasure of “…finding interesting speakers which I did for six years.  We were privileged to have several from the East Coast.” 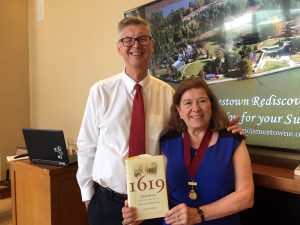 Dr. Horn with Society Councilor and Past Governor Ginny Gotlieb

She added, in her capacity as Society Councilor, “I have never seen the Jamestowne Society more vibrant and focused on fulfilling its goals.  Thank you for your individual gifts and for supporting this Company’s strong and steady practice of Company gifts.  These annual gifts are key to the success of the Society’s projects. First California Company, over the years, has given to Jamestown Rediscovery, Preservation Virginia, the Wingo Fund, scholarships, the mortgage retirement Fund for our headquarters building in Richmond, and the 400th Anniversary celebration [of the 1619 events].  We can be very proud of this!” The Society’s contributions to Jamestowne Rediscovery have gone for the church tower preservation, replica bells, golf carts for staff and other transportation and archeological dig investigation of the remains of the 1617 church within the 1907 Memorial Church.

Past Governor Donna Derrick noted that during her tenure, our company actively participated in the efforts to thwart the construction of power transmission towers across the James River by asking the US Army Corps of Engineers to prepare an Environmental Impact Statement that would consider all alternatives to the towers. Dominion Energy succeeded in obtaining a permit without the EIS, and the towers were built. However, on March 1, an appeals court vacated the USACE permit and directed it to follow to the law and prepare the EIS. Please watch for more on this.

Our next meeting is scheduled for Saturday, October 26, 2019 at the Lomas Santa Fe Country Club in Solana Beach, with the program focused on the First Thanksgiving in 1619 at Berkeley Plantation.

Thanks to Erica Hahn her contribution to this report.