Our Winter Meeting: A Celebration of the Life of Pocahontas

We began with Dr. Jessica Stern’s engaging and informative presentation on Pocahontas; Her Life and Times in England and the 400th Anniversary of her Death in March 1617.

In her talk, Jessica sought to answer this question: how did Pocahontas feel when she went to London in 1616, around the age 20? We have ample evidence about how the Virginia Company saw her visit. Seizing on a new peace forged between the Chesapeake Algonquian and the English in Virginia (manifested with Pocahontas’s 1614 marriage to John Rolfe), the Virginia Company hoped to use her visit to promote colonization. 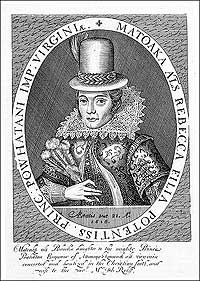 As made clear in this portrait commissioned during her trip, they sought to emphasize that Pocahontas was Native AND English, and solicit investment in a missionary school. But what about her? Did she feel excitement? Or did she feel captured and homesick?

After showing a digital depiction of how 17th century London may have appeared to Pocahontas, Jessica suggested that, at the very least, the sights, sounds, smells, and crowds must have been jarring. She (much more so than Rolfe) was treated with great pomp and circumstance, which exhausted her – treated to plays, at court, and at the Tower. She and her family moved to an estate in the suburbs to give her some rest. It was there John Smith came to visit her, and it is his account of her views that is the most revealing. As he recalled, she revealed that she feels like a stranger in this land, is duty bound to be Smith’s “child and countryman,” and believes the English “lie often.”

To Jessica, this suggests that Pocahontas saw her trip to England as an extension of the role she assumed the day she participated in the adoption ritual of Smith in 1608 (which he interpreted as her having saved his life out of affection). Then, as in England, she was working to forge a peace between the English and Natives, a role that to which she seemed resigned. But this dutiful life was cut short. As her ship began its trip back to Virginia in March 1617, Pocahontas fell ill, probably of a lung ailment like tuberculosis and died. With her, she had carried 100 pounds that had been donated to start the mission school. She was buried at St. George’s church in Gravesend.

After luncheon was served, new member Gale Hewes was introduced and the meeting moved on to company business, including officers’ reports and announcements. They included:

We will next convene for our 2017 Annual Meeting on Saturday, June 24 in Carlsbad at the Green Dragon restaurant, which is modeled after the Boston tavern where the American Revolution was plotted. 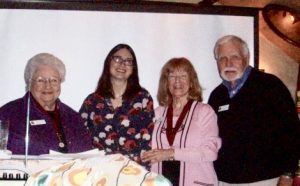 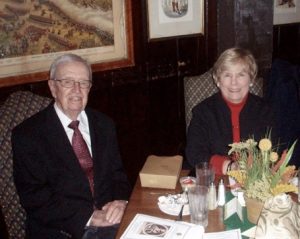 New member Gale Hewes and her husband, Phil, at left 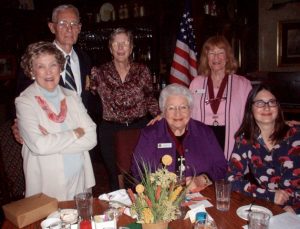 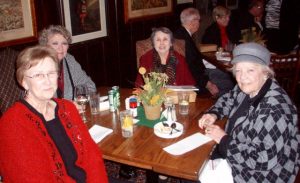 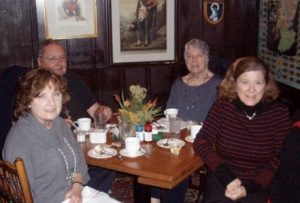 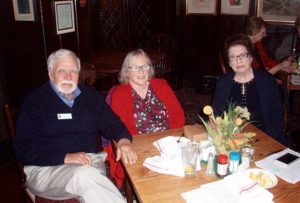