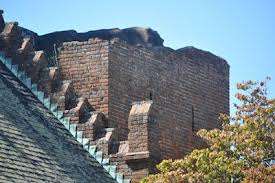 Jamestown Rediscovery is preserving important evidence of our ancestral heritage with completion of phase I of the repair and restoration of the 17th century church bell tower. The deteriorated masonry at the top of the structure that posed extreme risk of falling on visitors has been mended and replaced and a lead cap installed that will maintain its integrity for the foreseeable future. 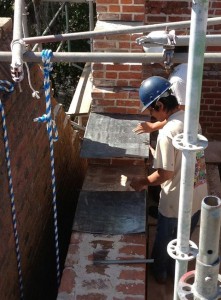 Important lessons for this project have been learned from past preservation mistakes; practices that were used in the 19th and 20th centuries accelerated deterioration. In the tower’s case, then-modern cementing repairs trapped moisture in the ancient bricks that became vulnerable to expansion and freezing. New preservation techniques use mortar made with time-proven pulverized oyster shells (as were the original materials) that will enhance the life of the old and replaced bricks (the replacements were made by Colonial Williamsburg with a centuries-old method.)

We previously reported on the need and progress toward this project, and Jamestown Rediscovery has posted Restoring An American Icon, a YouTube summary of this summer’s work. This complements a local press report by Mark St. John Erickson in The Virginia Gazette that offers other details. The JR crew will return next year to continue with repair and restoration at the tower’s lower levels, which have not posed such dire hazards.

First California Company members should take pride in making our contribution to the Jamestown Society’s $10,000 gift that served as the bell-cow to evidence grass-roots support and helped to attract the balance of the $200,000 to fund this project.

On November 2, the Society will get a comprehensive status report on the project from Andy Zellers-Frederick, the Director of the Historic Jamestown Fund at Colonial Williamsburg Foundation.

1 Response to Preserving Our Ancestral Heritage