Found: America’s First English Garden…or Was It a Farm? 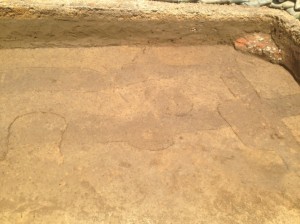 Perhaps those first settlers weren’t so “lazy,” after all, belying what some historians have been telling us for many decades.

In exploring the first extension to James Fort, Jamestown Rediscovery has recently uncovered evidence of their first attempts at agriculture and traces of cultivation, where furrows were made by hoe and other 17th century back-breaking implements. The ten furrows, added to others discovered about ten years ago, indicate that by 1608 they had attempted to plant about ten acres of yet-to-be determined crops.

In a video and comments posted by Jamestown Rediscovery, Bill Kelso summarizes the efforts and results of past weeks’ digs and examination  by Dan Givens and other JR archeologists.

Articles by Brittany Voll in the Williamsburg Yorktown Daily and Mark Erickson in the Daily Press and Virginia Gazette offer more details of the findings.