We are updating our posts of December 6, 2012 and May 11, 2013  with this progress report on the restoration of the 17th century church bell tower.

The need for the repairs and restoration is much more clearly seen in this black and white photo of its westerly exterior that shows its extensive damage from years of weathering: 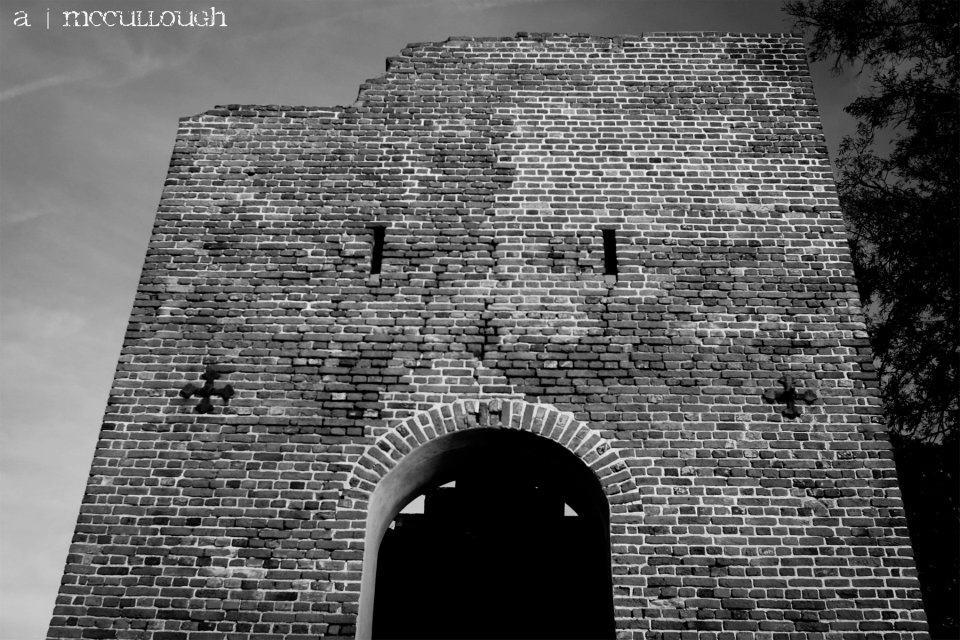 We have this report from Andrew A. Zellers-Frederick, Director, Historic Jamestowne Fund:

“The Jamestown Church Tower Project officially commences on July 8th when the scaffolding will be fully placed.  As you know, this is Phase I, which will involve the removal of the 1960s-70s Portland cement parging and cap for the top of the fall to the first encounters structural step; the removal of the cement pointing in areas being repairs; the repointing and stabilization of masonry, primarily from the vent holes to the top of the walls, the stabilization of the upper portions of the walls which have been structurally compromised, the application of a lime based cap on top of the walls and upper interior ledge; and select pointing where mortar joints have severely deteriorated.

“In the meantime, Colonial Williamsburg has been diligently making 17th-century brick in its brickyard (about 4,000) for use in this project.  In addition, the scientific dedrochronology study to try and better date the Tower is scheduled.  This work should go about 8 weeks or so.

“We have raised approximately $205,000 from gifts including the Jamestowne Society, the Commonwealth of Virginia and many interested individuals.  We might have enough to cover the second phase next year, but certainly more funds will be required for Phase III which will involve the design and placement of an interior roofing system (“invisible” from the outside) and a water removal system or we would have the same problem returning an a decade or so.”

If you wish to make an individual contribution to the Phase III needs,  please send it to the First California Company (see below) or directly to the Society at Post Office Box 6845, Richmond, VA 23230.  Indicate that you are affiliated with the First California Company and that the donation is for the Jamestown Church Tower Restoration Project, the Society’s dedicated capital fund account for this purpose.