First California Company celebrated our 15th anniversary at the 2014 Annual Meeting on Saturday,  June 28 at the Rancho Santa Fe Golf Club. Four charter members were present among the 38 members and guests, including Martha Pace Gresham, our Organizing Governor.

Governor Ginny Gotlieb supplemented her report on the Society’s Governors’ Roundtable and Council Meeting that was held in Williamsburg May 16-17 (see her June 22 post) with the following: 122 members have been added. The five new companies that were chartered bring the total to 45.  The Governors toured the Jamestown Rediscovery vault, which now has over three million artifacts (ed. note: Jamestown Rediscovery celebrated its 20th anniversary on April 4th). The Jamestowne Society’s Facebook page has almost 400 followers. The Commonwealth of Virginia is preparing to erect a monument honoring twelve Virginia historical women, but it does not include Pocahontas, so the Society’s Council voted to send a letter to Governor Terry McAuliffe to ask that the monument include her and suggested that members may want to do so also (ed. note: see email link to Governor McAullife.) In 2019, Historic Jamestown will focus on commemorating the 1619 establishment of the first elected representative government in the New World. Dr. William Kelso is updating his 2006 book The Buried Truth, to be published as More Buried Truth at a future date date to be announced.

Martha Gresham gave an interesting report on the definition and meaning of 50 acres as used for headrights at the time of Jamestowne, which are the same size as 50 acres today.

We elected and installed new officers and Councilors, as reported by Governor Donna Derrick in her July 3 message.

Our New Officers and Councilors Are Installed

Treasurer Harry Holgate presented his financial report and budget for 2014-16, which were adopted by the membership.

Scarlett Stahl, a Pocahontas descendant, gave her first-hand report on Historic Jamestown’s commemoration of the 400th wedding anniversary of Pocahontas and John Rolfe, with a reenactment of the ceremony as the site where it took place, as reported in our April 15 post.

Governor Derrick reported on the meeting’s other significant pieces of business in her July 3 News Post.

After the meeting concluded,  the group was shown Historic Jamestown’s documentary, Jane. 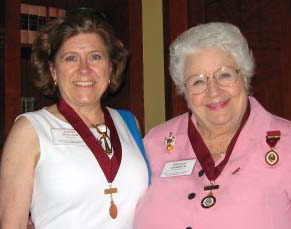 Our Outgoing and Incoming Governors 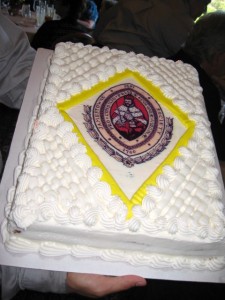 Please watch additional posts for photos of the event.